You are: Home » Tokens and medals » Articles » The fun of medal collecting

The fun of medal collecting

The first medals were produced in Italy in the 14th century. During the 15th century, medals then spread to other parts of the European continent, particularly Germany, France, Belgium and Holland. By the 16th century, medals appeared in Britain.

Medals are produced by two main methods: casting and striking. The earliest medals were cast, produced from hot metal poured into a mold. Most modern medals are struck, produced when a blank is impressed with the images of two dies. Uniface medals only have an image on one side. High relief medals are usually struck more than once.

Medals are usually made of metal: the most common are copper, bronze, brass, silver, gold, white metal, lead and aluminum.

Although some medals may look like coins, they differ from coins in that they are not used as a medium of exchange. So you can't go to the store and buy something with them.

There are many different kinds of medals, but perhaps the most common types are commemorative medals (those that record some historical events such as the coronation of a king or queen). Other medals are awarded as agricultural and horticulture prizes, school prices, sporting and athletic prizes, and exhibition prizes. I'll give some Canadian examples of these types of medals. 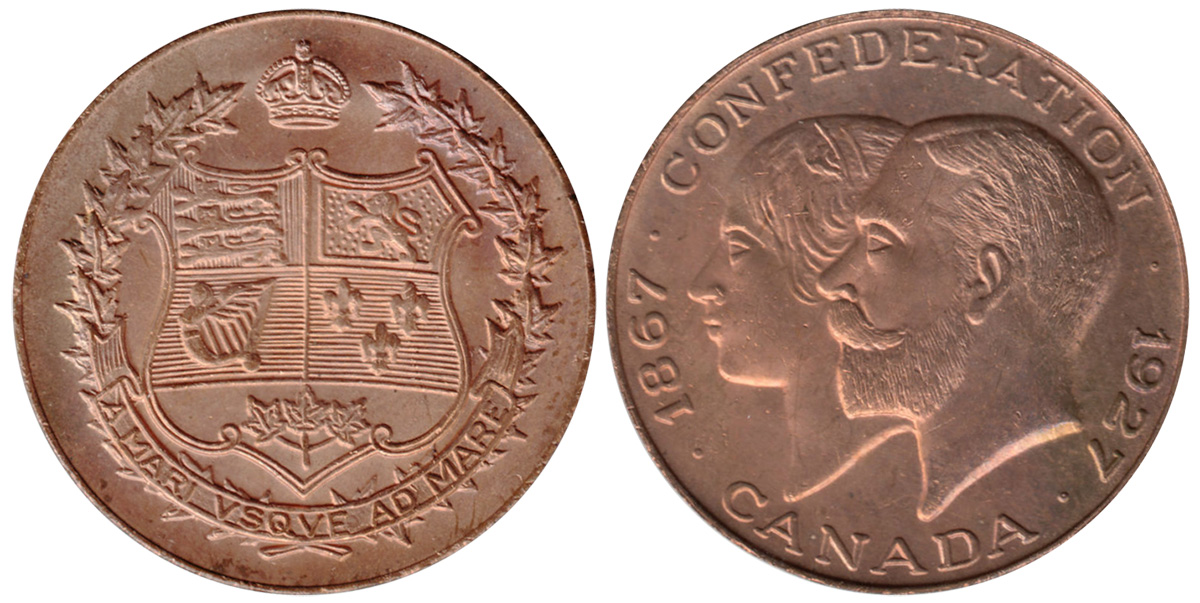 One of the most common Canadian medals was struck in 1927 to commemorate the 60th anniversary of Canadian Confederation. This 25 mm medal portrays the co-joined busts of King George V and Queen Mary. The obverse includes the dates 1867/1927. The reverse includes the Canadian Coat of Arms. These medals are easy to find in grades EF - Brilliant Uncirculated. They can be purchased for about $2, sometimes less.

Another commemorative medal is a series of three medals produced in 1939 to commemorate the Royal Visit to Canada of King George VI and his wife, Queen Elizabeth (who is now the Queen Mother). These were produced on the eve of World War II and marked the first visit to Canada by a British Monarch.

The easiest to obtain medal of this series is 25 mm and made of bronze. It has the co-joined busts of the King and Queen on the obverse, while the reverse shows the map of Canada with two sets of railroad tracks, depicting their coast-to-coast travel across Canada by train. Again, they are easy and cheap to obtain in grades ranging from EF to Brilliant Uncirculated and cost about $2. Some of these are now beautifully toned in various colours and often command a slight premium in price.

A slightly less plentiful medal in the series is the larger 30 mm version. Also made of bronze, you should be able to find them for $5 or less in EF to Brilliant Uncirculated condition.

The most difficult one to obtain is the 30 mm medal produced in silver. It was sold in Canadian post offices for 50 cents in a small box. Unfortunately, most of these medals no longer have the original box.

The silver version is the same size as the Canadian 50 cents and is quite scarce. They can be purchased for $25 or less without the box. The series of three medals are an interesting addition to any medals that new collectors begin to collect.

One of my favourite school prize medals was produced by F.W. Ellis & Co. The obverse, which has no date, shows a shield, maple leaves and a beaver on a crown, with the words Toronto Public School Boards. The reverse says 4 Years Good Conduct Punctuality Regularity Diligence.

It was produced by William McKendry of Toronto.

This attractive 40 mm bronze piece has fairly high relief on the obverse and can be purchased in EF - Uncirculated condition for about $15.

A different price medal is the McGill University athletic award with high relief on the obverse.

It features a clothed figure blowing a large horn with a naked man to his right.

The reverse has the words McGill University Montreal, plus a crown, crest and maple leaves. This 39 mm medal was produced by Eli Morton and Company in London and has extremely high rims on both sides.