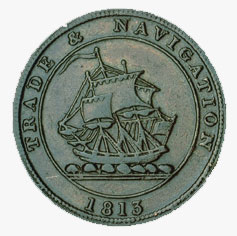 It took some time before the public regained its confidence in paper money, as the bad taste left by the notes of the French colonial period lingered. During the War of 1812 between the United States and the colonies of British North America, the Canadian colonial authorities began to issue "army" bills. Used to finance the war effort, these bills circulated in large numbers within the colonies. When the war ended in 1815, the British government redeemed the notes at full value - to the great relief of the people. This helped restore the public's trust in paper money once again, which led to the rise of banks.

Tokens served as coins during the early decades of the 19th century. Extensive quantities of low-denomination tokens were imported from England by merchants hoping to facilitate business in the colonies and make a profit on the tokens. Some of these tokens were anonymous, that is, they did not indicate the name of the merchant who had imported them, while others carried the name of the merchant, such as Lesslie & Co. of Toronto. These tokens offered customers a discount on their future purchases to entice them to return, just as Canadian Tire "money" does today. 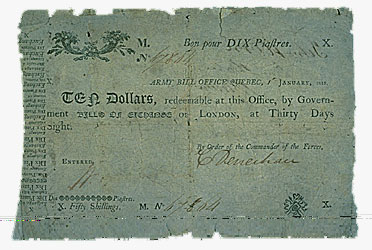