You are: Home » Tokens and medals » Articles » Top 10 most valuable Canadian tokens sold at auction in 2020

Top 10 most valuable Canadian tokens sold at auction in 2020

The sale of the most impressive collection of Canadian tokens from Doug Robins marked 2018, 2019 and 2020. Doug Robins' wife contacted Heritage after the dead of his life partner to sell these tokens collected mostly in the between 1970 and 2000. Some of the rarest pieces known were sold by Heritage Auction this year. Here's the Top 10 most valuable Canadian tokens sold at auction in 2020 so far. 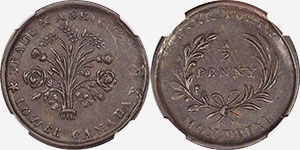 This token, believed to be produced by Jean-Marie Arnault of Montreal, is one of the rarest Canadian token. In 1955, Fred Bowman suggested only 5 to 6 specimens were then known. It sold on July 5, 2020 for $25,920 CAD. At an American Numismatic Association auction, part of John J. Ford, Jr. Collection, an example sold in August 2013 for around $46,000 CAD. HA descibed the edge of this token:

This piece has an unusual incuse edge decoration resembling reeding, but is a repeating design with non-parallel lines. This edge decoration could only have been added later. While Jim Haxby thought that there was some possibility that this piece was an electrotype prior to its certification, we have examined photographs of 4 specimens. The Ford, Charlton, and Ferrier pieces all seem to show thin, spindly lettering, a thin ribbon with incomplete features in the bow, and sharply contoured features, while those on the Courteau example are noticeably fatter, though this may owe somewhat to the clear wear that piece had encountered. All appear to show sharp rims, which on the reverse begin to weaken around the M in Montreal continuing clockwise, with the exception of the Ford specimen, which may simply owe to the lighting in the photograph.

A second example of this coin NGC XF-Details (Rev. Damage and Corrosion) also sold at the same auction for $13,770 CAD. 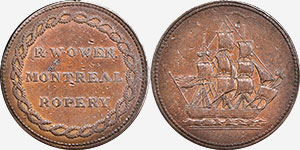 An estimate of 15 of these tokens survived, most of them in museums collections. Issued circa 1824, before Owen sold his company to Canada Cordage Co. and J.A. Converse.

An estimate of 10 of these tokens are known. These tokens never really were in circulation. Most of them were melted. It once was part of the Roy Hughes Collection.

The undisputed key to the 'Side View' series, pairing the Bank of Montreal obverse legend with the Banque du Peuple ribbon reverse. Originally considered an error, scholars now believe it was deliberately struck by a manufacturer to serve as some sort of sample piece, and was thus never intended to be released into circulation.

Last example at auction before this one sold for $10,200 was certified AU-53.

One of the finest known of its type. During the first half of the 19th century there was a chronic shortage of small coins in Lower Canada. In 1835, following a government decision to remove all the lightweight pieces from circulation, the shortage became acute. No official coins were issued but the Bank of Montreal and other banks were given authority to issue penny and halfpenny tokens like this one.

While expressing some of the minor porosity over the N's in Halfpenny known for the issue, this is virtually the only evidence of porosity on the piece, with even traces of die polish in the obverse margins. 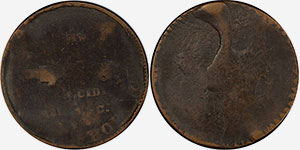 Blacksmith tokens are counterfeits of old English and Irish coins. Most of them were made very worn to create the illusion of circulation.

This example, listed as Wood #27 and Charlton BL-44 was part of David Bowers Collection and sold in February at a The Canadian Numismatic Company auction and the only token not from the Doug Robins Collection on this list. 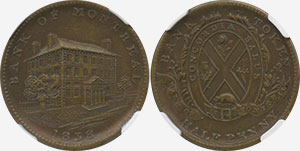 This coin sold on April 30 at Geoffrey Bell Spring Sale 2020 auction. It was described like this:

Lovely almond brown colour with remaining glossy lustre. From the Doug Robins Collection. Eugene Courteau regarded this variety as R-10 and, thus, an extreme rarity. Indeed, Mr. Chapados-Girard, the editor of the most recent Charlton standard catalogue of Canadian Colonial Tokens, could not find a single sale appearance, for this variety, up until the submission of his information for the catalogue, in the summer of 2019. There were none present in the Ford sale, by Stacks Bowers, in 2013, nor was one included in the first sale of the Doug Robins Collection, held in Chicago, by Heritage Auction Galleries, in 2018. This piece surfaced last fall, after the current token catalogue had been submitted for publishing, and could represent the only available example of this variety.

This proof token was produced by the Soho Mint, but the design was never used in Upper Canada. Restrikes exist.

After the American revolution the Magdalen Islands were granted to Sir Isaac Coffin, who only once visited his American possessions ; this was in 1815. Before starting he ordered a large number of these coins and a coining press from Sir Edward Thomason, of Birmingham. These he brought to the Islands and distributed the coins by way of loans among the chief men in the Islands. It was his purpose to set up a mint and coin half-pennies as well, but no other coin than this one was ever issued.

It was described by Heritage Auctions as:

Variety with LCW initials beneath bust. A sensational gem whose details and peripheries remain outlined in mint red, subtle touches of iridescence visible throughout. "L.C.W." is incompletely struck, but discernible underneath the bust.