You are: Home » Tokens and medals » Articles » Top 10 most valuable Canadian tokens sold at auction in 2021

Top 10 most valuable Canadian tokens sold at auction in 2021

The North West Company was one of the most important companies engaged in the fur trade during the late 18th and early 19th centuries. The company began about 1775 as a loose partnership of men from Scottish, French-Canadian and U.S. backgrounds. By 1804 it was a well-organized business offering strong competition to the Hudson's Bay Company.

In 1820 the company issued both brass and copper tokens, each representing the value of one beaver pelt. These tokens were about the size of our present 50-cent piece and most known examples have a small hole at the top.

Purchased from Warren Baker on April 22, 1977. An estimate of 15 of these tokens survived, most of them in museums collections. Issued circa 1824, before Owen sold his company to Canada Cordage Co. and J.A. Converse.

Two others sold this year, one at an Heritage Auctions auction certified NGC VG-10 for $13,500 (McKay-Clements Collection) and an ICCS F-12 (Mark) from the Sherbrooke Seminary which sold for around $9,500.

The multiple varieties of the Bust and Harp (Breton #1012) might be hard to identify or remember especially for new collectors. This step-by-step Identification Guide will assist you through the major varieties of this popular token and will help to associate your token with the right variety.

This token was described in 1998 by Stack's Bowser as:

Edge decorated with fine, regularly spaced, shallow diagonal lines resembling engrailing. 206.0 gns, 29.0 mm. Rim thickness 2.1 to 2.35mm. Struck in copper, fire-gilt at Boulton's Soho Mint in Birmingham. Unique, this is the only one we have ever seen or heard of. Light scratches on reverse above COMPANY in the inscription. These tokens were struck in England, on the orders of Lieutenant Governor John Graves Simcoe, as a coinage proposal for Upper Canada.

One of the finest known for this variety.

During the first half of the 19th century there was a chronic shortage of small coins in Lower Canada. In 1835, following a government decision to remove all the lightweight pieces from circulation, the shortage became acute. No official coins were issued but the Bank of Montreal, the Quebec Bank, the City Bank and La Banque du Peuple were given authority to issue penny and halfpenny tokens of a weight similar to that of British copper coins.

Hunterstown was a small village on the Rivière du Loup, about 25 miles from Louiseville. Sometime, about the year 1850, an American lumbering firm, known as the Hunterstown Lumbering Company, secured the limits, and for years carried on extensive operations. The company had a supply store, and paid their men in script, redeemable at the store. This token, was good for a half-penny. The first specimen known to collectors came into the hands of Mr. P. Murphy at Quebec. 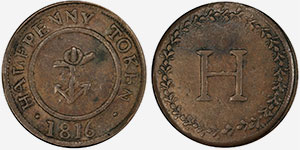 Issued by James Milner, this token was purchased from Warren Baker on February 28, 1980. One of the finest known.

Only two examples known in private Hands, previously owned by Donald G. Partrick. BL-44 (Extremely Rare) and Wood-27. Two examples are in the Bank of Canada Collection and another one in Stack's Bowers/David Bowers' Collection