During much of the century preceding Confederation there was a chronic shortage of small change in all the British provinces. No official coins were provided for either Upper or Lower Canada and the foreign coins brought into the country tended to flow out again. The gap was partially filled by enterprising merchants who issued their own tokens as a local coinage. One of these firms was Lesslie & Sons, Toronto and Dundas, who issued halfpenny and two-penny tokens. The copper two-penny piece illustrated is the largest coin ever issued in Canada and it is considerably larger and heavier than a silver dollar. It is in the National Currency Collection, Bank of Canada. 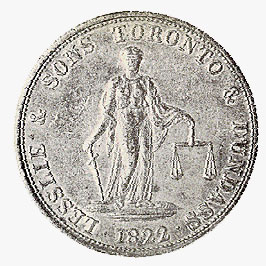