You are: Home » Tokens and medals » Publications » The Copper Tokens of The Bank of Montreal

The Copper Tokens of The Bank of Montreal

Entered according to Act of Parliament of Canada, in the year one thousand nine hundred and nineteen, by Eugene G. Courteau, M.D , at the Department of Agriculture.

It is with great pleasure that I attempt to compile a list of the Bank of Montreal copper tokens, especially at a time commemorating the centenary of the foundation of one of our greatest - if not the greatest - financial institutions. I had hoped to have published this book in 1917 or 1918, but the war, and my professional duties during the epidemic of influenza, prevented me from doing so.

At the dawn of the 19th century, Commerce and Industry in Canada increased considerably, especially in the town of Montreal. The Molson family added much to the development of trade in being the first to inaugurate steam navigation on the St. Lawrence river, and ever since, the name of that progressive family has been associated with commercial enterprises.

They (the Molsons) left to collectors also a memento of their great trading in grain with farmers in the form of a copper "sou," dated 1837.

In 1817, for the first time the Bank of Montreal opened its door to trade and commerce, and, despite the critical times the country had to go through in the thirties, its wise management was crowned with success; steadily gaining in strength and reputation; it to-day is justly considered one of the strongest financial institutions of this continent.

From 1834 to 1841, the state of affairs was so bad and the small currency for many years back was in such deplorable state, that the Bank seeking for a remedy to relieve the situation applied to the British Government for an authorization to issue copper tokens.

This was the cause of the issue by the Bank of the tokens described in this list. Some authors have stated that certain varieties of the Ships, Colonies and Commerce tokens were struck by the Bank of Montreal, but this being doubtful, I think best to not include them in the list.

Concerning the degrees of rarity, I must admit that it is difficult to give them in a strictly accurate manner, because most of the varieties, included in this list are here described for the first time. The different degrees are given after most careful examination of a great number of specimens, the accumulation of many years. Specimens rated R. 1 or 2 are relatively common, while those rated R. 7 or 8 are very rare, R. 9 of the utmost rarity and R. 10 unique.

The more striking points of dfference in these tokens are found in the stems of the rosebuds and in the relative positions of the laurel leaves opposite the word bank.

These are generally termed the English bouquet-sous on account of their having been made at Birmingham, and further from the error in spelling the word "Sous" plural, instead of singular.

Obv. Stem of. left bud is broken; the right thistle has a very slender stem, while that of the next bud is wanting, as well that of both roses; single bow to left with ribbon on either side.

These tokens were issued by four banks: the CITY BANK, the Quebec bank, the banque DU PEUPLE and the bank of Montreal. The latter only will be described here.

The type on the obverse represents a farmer (known here under the name "habitant") of LOWER CANADA - now the Province of Quebec. The dress he wears consisted of a coat of home spun with "capuchon" (cowl or capouch), "ceinture flechee" (sash with arrow-shaped design), "tuque bleue" (woolen blue cap) and "souliers de boeuf" (soft leather shoes without soles). This may be considered the national costume of the Province of Quebec at that time.

The Arms on the reverse are those of the City of Montreal, designed by Jacques Viger, first mayor of that city, and were approved by the Council in 1833. The motto on the garter: "concordia salus" (Safety in Union - of the races) is appropriate, as at that time the population of Montreal was mostly composed of Scotch, represented on the shield by a thistle, English by a rose, Irish by a shamrock, and French - which were by far the most numerous - by a beaver, as pioneers of the country. The beaver and maple leaf being the recognized emblems of Canada.

The points of difference in the halfpennies will mainly be found in the relative position of the letters on the obverses - in many instances the letters S's are inverted; then on the reverses the upper shamrock leaf is in some instances disconnected from the main stem and in others is not.

On the pennies, the difference is in the whiplash, the period after Canada, and in the shamrock sprig on reverses.

The habitant tokens, the side-views and the front-views have all borders of small dots and a plain edge.

I am greatly indebted to Messrs. S. H. and H. Chapman of Philadelphia, for the description of these tokens, the particulars of which I have mostly taken from their able description of this series, in Mr. Chaloner's sale catalogue.

All the 1839 tokens have the inscription on ribbon incused.

On both tokens, the side - and front-views, the buildings and the trees have several points of difference, especially the trees; on the former type they are short and bushy, while on the latter they are taller.

The different positions from which the building had been sketched would however account for this; but if I may judge from a picture taken in 1846, which I have seen, I would consider the "side-view" a more accurate representation of the building than the "front-view," though the latter is of much better execution.

A careful examination of these tokens will reveal in many specimens small defects and cracks in the dies. Some of these I have purposely omitted to mention when the identification of the token is otherwise certain. The mere presence of a die crack is not enough to constitute a distinct die variety.

I have, however, made exceptions in certain cases, more especially when describing the pennies of this series, when the description of the die cracks will aid in their identification and subsequent classification.

In order to facilitate the description of the half pennies, I have neglected the chronological order and will divide them into three groups, viz., the "Tall trees," the "Heavy trees" and the "Small trees."

In the last two groups, the heavy and the small trees, there is a small defect in the die having the form of a line running from the first upper right window to border-stone, and the sixth cornice block from the left, and the left half of porch roof are recut. This induces me to believe that they are from the same obverse die, though evidently the "Heavy trees" group from the die after it had been retouched.

Since the varieties with the opened M are more numerous, in the description I shall avoid mentioning them in all cases, but will do so for the closed M. Same remark regarding those dated 1842, they will be mentioned in all cases, whereas the 1844 tokens will be so only where the date changes.Therefore when the date is not given, it will be understood that it is 1844.

To avoid repetition in describing reverses, I think it best to mention here that there are two varieties of beaver on shield, one with a long nose and the other with a short one. In the long-nose variety the beaver has rather the head of the common house rat - the nose being too sharp, and the ornamental leaf surrounding the garter to the left is always met with a long inside point at bottom, hence a wide, deep notch ; whereas in the short-nose the head resembles mora closely that of a beaver and the inside point at bottom of left leaf is short, hence notch more superficial and angular.

With this in view, I believe that the task of collectors in identifying varieties will be much easier. The collector must be careful, whan grouping his tokens for the purpose of identification, that he keeps each variety of tree groups separate. By doing this he will avoid mingling the "Tall trees" varieties with either of the other groups, and vice versa.

Moreover, he should ascertain whether the coin he wants to classify bears a long or a short nosed beaver, a circular or an oval period - particularities mentioned after the description of each variety, and find out if these particularities correspond with the coin he desires to identify.

The trees next to building are tall, especially the left one, the top of which is close to and on line with the upper string course (a level range of bricks or masonry projecting slightly in front of the building at the intersection of each story, this string course marks the division of the building into stories). The striking feature of this type is in the appearance of same tree which is distorted-like, as under a strong wind.

In this group the trees are not so high, the top of left one being farther from building and below upper string course. There is a short line from base of left fence running upwards.

The trees are smaller and there is no line running upward from base of left fence. The T in MONTREAL is away from ground, R farther from side-walk, E from base of fence.

The die used in the striking of the obverses of this group is undoubtedly the prototype of the " Heavy trees." This explains the lighter design found on the "Small trees" varieties.

Before closing with this series, let me mention here that there is to be found a half-penny dated 1845, but as this token is generally known as a pattern, I feel justified in mentioning the fact only and in not assigning to it a separate number. 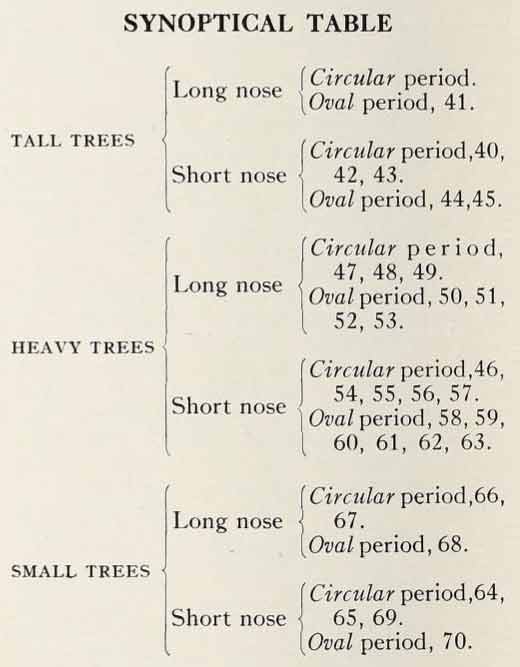 The points of difference in the obverses of these tokens are in the door, which in some cases has mouldings and knob and in others has neither. In the left fence, which is sometimes found perfect and other times broken. In the letter A's, which on some varieties are perfect and on others lack part of right ceriph. Some of the windows also show differences in the frames and bars.

In the reverses, the main points of difference are to be found in the left thistle leaf, on some varieties it is perfect, on others it is short of one point inside; in the leafless-stems of the shamrock sprig, which in some instances are all forked and in others are not; some varieties show four leafless stems, others only three.