You are: Home » Banknotes » Articles » Bank of Canada's history 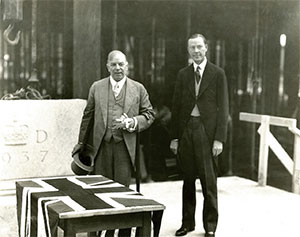 Until the Great Depression of the 1930s, there appeared to be little need for a central bank in Canada, which was sparsely settled and mainly rural at the time. British influence was reflected in the preference for a limited number of banks with multiple branches. In a relatively undeveloped economy, branch banks could be established with less capital and fewer skilled officers than would have been required for independent banks at each location.

South of the border, a different philosophy encouraged the development of independent local banks, and a larger population, clustered in established communities, made it workable.

Canada's branch bank network was sufficient for the nation's needs for almost a century. The chartered banks provided the bulk of the notes in circulation and could meet seasonal or unexpected demands. The larger banks were able to deal with government business without strain, and the branch network gradually developed a system for clearing cheques between banks.

The Great Depression, fuelled by drought conditions and a worldwide economic slump, contributed to a change in government and unprecedented public criticism of Canada's banking system. It also coincided with Prime Minister R.B. Bennett's concern that Canada lacked a direct means for settling international accounts. In 1933, he set up a Royal Commission to study the organization and working of our entire banking and monetary system [and] to consider the arguments for or against a central banking institution.

The arguments for won. The Royal Commission, headed by Lord Macmillan, recommended in its report the establishment of a central bank. A week after the report was made public, the Prime Minister announced that his government would adopt the recommendations.

An appendix to the report, titled Suggestions as to some of the Main Features of the Constitution of a Central Bank for Canada, became the framework for the Bank of Canada Act, which received royal assent on 3 July 1934. In March 1935, the Bank of Canada opened its doors as a privately owned institution, with shares sold to the public.

The first Governor of the Bank of Canada was Graham F. Towers, a 37-year-old Canadian who had extensive experience with the Royal Bank of Canada, both in Canada and abroad. He had appeared before the Macmillan Commission on behalf of the chartered banks. He would guide the Bank for 20 years.

Soon after the Bank opened, a new government introduced an amendment to the Bank of Canada Act to nationalize the institution. In 1938, the Bank became publicly owned and remains so today.

The organization of the Bank integrated new functions with functions that already existed elsewhere. Bank note operations were transferred from the Department of Finance when the Bank opened, and the offices of the Receiver General across the country became the agencies of the Bank.

A new Research Division was established to provide information and advice on financial developments and on general business conditions at home and abroad. The Foreign Exchange Division and the Securities Division became operative almost immediately, though the transfer of the Public Debt Division from the Department of Finance was delayed until suitable quarters were available. This did not occur until 1938, following completion of the present Bank of Canada building at 234 Wellington Street. The same building, to which two office towers were added in the 1970s, continues to house the Bank of Canada, although it is currently under renovation until 2017.

The Bank of Canada Act, which defines the Bank's functions, has been amended many times since 1934. But the preamble to the Act has not changed. The Bank still exists to regulate credit and currency in the best interests of the economic life of the nation. 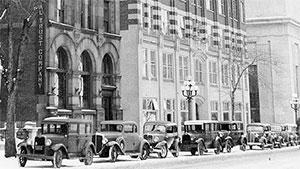 The Bank of Canada opened its doors in March 1935, operating from rented premises in the Victoria Building on Ottawa's Wellington Street.

Conditions in the Victoria Building quickly grew cramped and inefficient, and in January 1936, Governor Graham F. Towers proposed the design and construction of new premises to Prime Minister Mackenzie King. King agreed and, by May, the Bank had purchased a building site further west on Wellington Street, at a price of $83,500 (about $1.4 million in 2014 dollars).

The Bank hired S.G. Davenport of Montréal to act as consulting architect and adviser for the project. Davenport, in turn, recommended that the Toronto firm of Marani, Lawson & Morris be hired as principal architects. 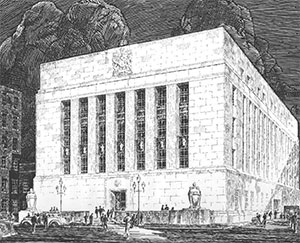 This firm submitted its first set of designs in May 1936. These were rejected, however, because they showed a building set in, somewhat in the manner of the Bank of England... It is extremely difficult to obtain unity in such a building. The inset part either looks like a chimney, or the whole thing looks like a flower pot in its saucer. The architects more or less agree with us, and are now trying something else. ? Letter from Deputy Governor J.A.C. Osborne to H.C.B. Mynors, 4 July 1936.

In December 1936, the architects presented final elevation drawings to the committee. These showed a five-storey stone-clad building, neo-classical in style and featuring two large stone urns flanking the bronze centre doors. Seven tall windows were accentuated with bronze-and-marble spandrels. There was also a substantial underground area, designed to accommodate vaults and strong rooms, all constructed in accordance with the most up-to-date methods. The plan provided sufficient space for a projected staff of 380 people.

Deputy Governor Osborne apparently had reservations about one aspect of the new design. He wrote to the Bank of England's B.G. Catterns on 6 February 1937: You may be somewhat mystified by what appears to be two very large bombs placed each end of the terrace. The façade might, I suppose, look a little weak without these [urns] to balance and pin the building to the ground, but we are not frightfully enthusiastic about them, yet cannot think of anything better...

Ground was broken early in 1937. The principal contractor was the Piggott Construction Company of Hamilton, Ontario, and subcontractors were drawn from throughout Ottawa, southern Ontario and Quebec. Construction proceeded rapidly, without any undue delays or cost overruns and, by 10 August, the structure was sufficiently complete that Prime Minister King could join with Governor Towers in the ceremonial laying of the cornerstone. (Embedded in the cornerstone is a copper box containing mementoes from the project.) Staff began occupying the building in 1938. 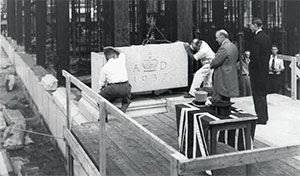 The Bank rapidly outgrew its new building. By 1946, staff were housed in temporary premises scattered around downtown Ottawa, and the Bank's executive commissioned Marani and Morris to develop proposals for renovations. These were never implemented. The Bank again turned to Marani and Morris in the 1950s for proposals on substantial additions to the building, but these too were eventually discarded.

In 1963, the Bank announced a competition in which a short list of Canadian architects would be invited to submit proposals for additions to the building. This appears to have spurred the Marani firm (now Marani, Morris & Allan) to revisit its earlier proposals, leading to a new design that the Bank's Board of Directors found imaginative and satisfactory. The competition was cancelled, and in January 1964, the Bank announced its intention to begin construction.

The Bank's plans were soon postponed, however. Ottawa in the 1960s was in the midst of an unprecedented building boom, and it became evident to the Bank's executive that the scale of their planned expansion would place undue pressure on the already overburdened construction industry. Late in 1965, Governor Louis Rasminsky announced that the Bank had decided to defer for the time being the start of construction of our badly needed new head office. 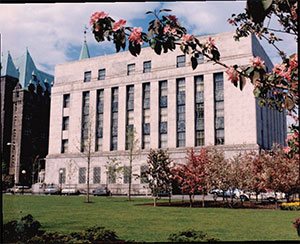 Western side of the Bank of Canada, 1966

By the time the Bank was finally ready to build in the late 1960s, it was decided to commission a new design. The Marani firm- now Marani, Rounthwaite & Dick- and Arthur Erickson were hired as associate architects and, in 1969, their new design was presented to the Bank. It preserved the original granite building, partially enclosing it in a vast glass courtyard flanked by two glass towers.

Construction began in 1972 and continued throughout the decade. The building was completed in 1979, and staff were fully installed by 1980. The Bank of Canada headquarters remains one of Ottawa's most distinctive and architecturally noteworthy buildings.

The Bank launched a formal plan in 2012 to modernize its head office. Head Office Renewal was the Bank's largest infrastructure project since the two glass office towers were built in the 1970s. The design, by Perkins+Will Canada, focused on preserving and protecting the cultural and historical significance of the building while addressing the business needs of a modern central Bank. Head Office Renewal was completed in late 2016, and employees moved back into the building in early 2017.