You are: Home » Banknotes » Bank of Canada

The value of a Bank of Canada banknote depends on several factors such as rarity, quality and wear, mintage, supply and demand, etc.

On January 9, 2020, Bank of Canada governor Stephen Poloz says the central bank is working on plans for a new 5-dollars banknote. The consultations will be similar to those that led to the choice of Viola Desmond for the 20-dollars banknote.

Viola Desmond remains an icon of the human rights and freedoms movement in Canada. A successful Nova Scotia businesswoman, she defiantly refused to leave a whites-only area of a movie theatre in 1946 and was subsequently jailed, convicted and fined. Her court case was one of the first known legal challenges against racial segregation brought forth by a Black woman in Canada.

Commemorative $10 banknote celebrating the 150th anniversary of Confederation. This banknote was presented at a ceremony held on April 7, 2017 at the headquarters of the Bank in Ottawa and was put into circulation on June 1st of the same year.

This commemorative banknote is a variant of the $20 regular polymer one. It was put into circulation in the fall of 2015. The Bank of Canada issued 40 millions of these.

This is the first time that a series of Canadian bank notes are printed on any material but paper. Bank notes printed on polymer are already in circulation elsewhere. Internationally, the first non-paper notes were produced on a polyethylene material called Tyvek and issued in three countries in the early 1980s. Canada's new notes are unlike other polymer notes, however. 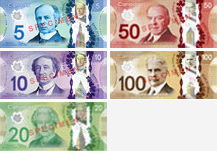 The Bank issued the new $100 bill in March, the $20 note in September, and the $50 note in November of 2004. As part of its ongoing efforts to improve the security of Canadian bank notes, the Bank of Canada issued a $10 note with upgraded security features on 18 May 2005 and completed the series with an upgraded $5 note on 15 November 2006. 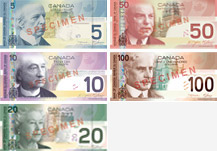 In 2001, the Bank introduced the new $10 note from the Canadian Journey series, followed by the $5 note in 2002. Notes in the new series are distinguished by new and enhanced security features to help fight counterfeiting and a tactile feature to help the blind and visually impaired identify the different denominations.

The 1986 series of bank notes, often referred to as the "Birds of Canada" series, was designed with enhanced security features to counter developments in colour-copier technology. 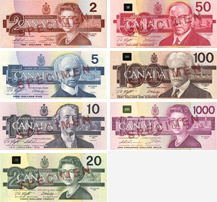 $5 and $20 banknotes issued in 1979 looks like banknotes 1969 to 1975 except that the serial numbers can be found on the bottom of the opposite side of the banknote.

Canadian banknotes of 1979 values and prices »

Because of a growing concern over counterfeiting, the Bank of Canada began to release a new series of bank notes in 1969. This series represented another complete departure in design from earlier issues. 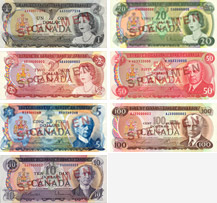 In honour of the 100th anniversary of Confederation, a modified version of the 1954 $1 note was issued, bearing the date 1967. The centennial logo was added to the front of the note and a view of Canada's original Parliament Buildings, destroyed by fire in 1916, was substituted for the prairie landscape that appeared on the original 1954 $1 note.

Canadian banknotes of 1954 without the devil's face

The third series of Bank of Canada bank notes was prepared in 1952. Significant changes to the design of Canada's paper currency gave it a whole new look that set the standard for the future. These banknotes were very different from the 1937 series, although the colours and bilingual nature were retained.

Canadian banknotes of 1954 without the devil's face values and prices » 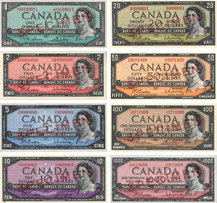 Canadian banknotes of 1954 with the devil's face

This series caused controversy because highlighted areas of the Queen's hair gave the illusion of a grinning demon behind the ear. The term "Devil's Head" is commonly used to describe these bank notes. The Bank of Canada had both bank note companies modify the face plates by darkening the highlights in the hair. These modifications were made in 1956 for all denominations.

Canadian banknotes of 1954 with the devil's face values and prices »

The creation of a second series of bank notes, only two years after the first issue, was prompted by changes in Canadian government legislation requiring the Bank of Canada to produce bilingual bank notes. Another contributing factor was the death of King George V on 20 January 1936 and the subsequent abdication of Edward VIII.

Canadian banknotes of 1937 values and prices » 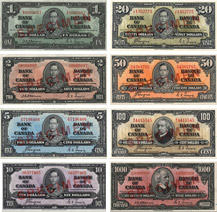 The Bank of Canada was created in 1934 and given responsibility, through an Act of Parliament, to regulate the country's money supply and to "promote the economic and financial welfare of Canada." Accordingly, it was given the exclusive right to issue bank notes in Canada. On 11 March 1935, the Bank of Canada issued its first series of bank notes.

Canadian banknotes of 1935 values and prices » 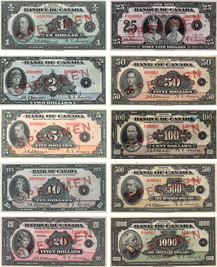