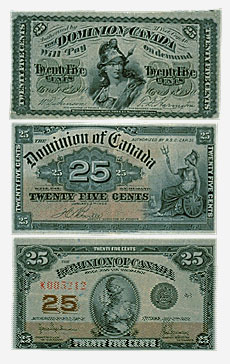 Between 1868 and 1869 the Dominion government withdrew from circulation and exported several million U.S. silver coins, which were actually worth only 80 per cent of their face value. This ensured that Canadian coins were the only coinage in use in Canada. Waiting for the 1870 series of coins to arrive from England, the central government resorted to issuing 25-cent notes. The public dubbed these small notes "shinplasters" after similar U.S. notes that were reputedly used, during the American revolution, to line soldiers' boots. The initial issue was followed by two others, the last occurring in 1923.

Some banks circumvented the agreement by issuing $6 and $7 notes (such as this $6 note from La Banque Nationale). In this way, they could carry out more transactions without having to use the $1 and $2 notes issued by the Dominion government. Only one New Brunswick bank was covered by the Bank Act of 1871. The others were free to issue notes in any denominations they wished, such as $3 notes (like this $3 note from St. Stephen's Bank). The Bank Act of 1881 restricted the banks to issuing $5 notes and multiples thereof.