You are: Home » Banknotes » Articles » Early bank notes in Canada 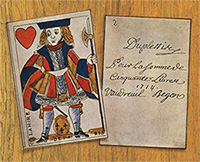 The earliest official paper currency in Canada was not a bank note–it was a playing card.

In 1685, a shortage of coins in the colony of New France prompted officials to look for new ways to pay their troops and continue trade and commerce. Their solution was card money–playing cards cut to different sizes according to denomination and signed by colonial officials. Since hard currency tended to leave the colonies as payment for imports, other forms of paper currency, such as bills of exchange and promissory notes, were used over the years to try to resolve the chronic shortage.

With the establishment of the first commercial banks in the early nineteenth century, bank notes provided a much-needed medium of exchange. But there were problems. Since many banks were issuing notes, businesses and individuals found it difficult to familiarize themselves with the various notes in each denomination and with the issuing banks. This made fraud and counterfeiting relatively easy. As well, notes were often redeemable for their face value only at their point of issue, thus forcing people to exchange notes at a discount in other parts of the country. 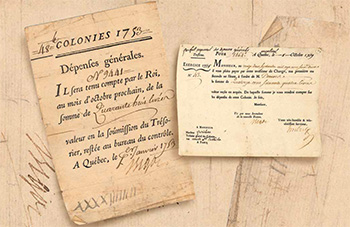 (Left) Ordonnance, 48 livres, 1753. Issued by the Treasury in Quebec for general expenses, ordonnances were a type of promissory note. Note the handwritten Roman numeral in the lower left corner. (Right) Bill of exchange, 1,464 livres, 1759. Issued by colonial officials at Montréal to pay expenses, bills of exchange drawn on Paris were endorsed and exchanged as a form of paper money. National Currency Collection

Despite these problems, the growing influence of commercial banks and the rarity of bank failures helped to boost confidence in paper currency, and the use of bank notes increased rapidly. Governments in Newfoundland, Nova Scotia, Prince Edward Island, and the Province of Canada also issued notes.

Confederation in 1867 brought banking and currency under federal jurisdiction. As provinces entered Confederation, new government took over their note issues. By 1870, Dominion of Canada notes began to replace provincial notes and circulated along with chartered bank notes.

The Bank Act of 1871, the first banking legislation of the new Dominion, removed the right to issue $1 and $2 notes from the chartered banks–a right taken over by the government. A revised Bank Act in 1881 restricted chartered banks to issuing $5 notes and multiples thereof. The printing, delivery, and destruction of chartered bank notes, as well as the destruction of the metal plates used to print them, were closely supervised by the Canadian Bankers Association.

Central Bank of New Brunswick, 5 shillings/$1, 1854. Despite the name, this was a commercial bank and one of the earliest to move to a coloured ink, intended to deter counterfeiting. Commercial Bank of Newfoundland, £5/$20, 1867. Issued by one of Newfoundland's two commercial banks, but printed in England, this note features a red protector, as well as a harp seal and a codfish, images immediately identifiable with the colony and its economy. Also note the red serial numbers. Bank of Western Canada, $4, 1859. Between the portraits of Queen Victoria and Prince Albert on this early note is a prominent protector–the red four–which was a common anti-counterfeiting technique at the time. The bank's capital assets of $1,000,000 are also prominently displayed. Located near Niagara Falls, the bank later became a wildcat, issuing worthless notes not backed by assets. Canadian Bank of Commerce, $10, 1917. This striking note is one of a series issued to mark the bank's fiftieth anniversary. It's more modern look lies in the clean lines of the centre panel and border, the style of the lettering, and the central guilloche pattern, which features an intermingling of several colours. The note-sized tableau features allegorical harvest figures depicted in a pre-Raphaelite style (i.e., meticulous detail, strong boundary lines, and a romantic medieval appearance).

This dual system of note issue worked well even through the economic turmoil of World War I. The Finance Act of 1914 made chartered banks' notes legal tender. This allowed the banks to meet depositor demands with their own bank notes rather than with Dominion notes or gold.

In the early 1930s, the onset of the Depression, growing public criticism of Canada's banking system, and a lack of means for Canada to directly settle international accounts prompted the government to form a Royal Commission to study the establishment of a central bank.

The Commission recommended the creation of a Canadian central bank that would have the sole right to issue bank notes in Canada. Chartered bank notes would be from circulation over a specified period. In general, Canada's commercial banks opposed the formation of a central bank. They cited several reasons, not the least of which was their concern that their profits would decline if they lost the right to issue notes.

In 1934, the newly created Bank of Canada was given the responsibility, through an Act of Parliament, to regulate the country's money supply and to promote the economic and financial welfare of Canada. The new central bank was also given the exclusive right to issue bank notes in Canada.

The Dominion Notes Act and the Finance Act were repealed effective 11 March 1935, the day the Bank of Canada opened. That same day, the first issue of Bank of Canada notes began circulating. 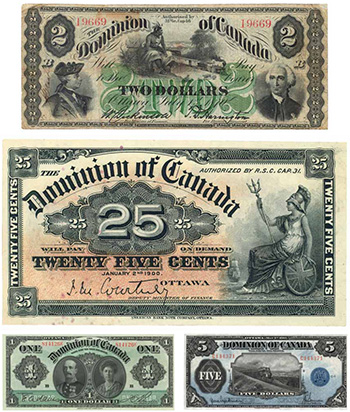 Dominion of Canada, $2, 1870. The first notes issued by the new Canadian government celebrated Canada's founding peoples. This note features portraits of General James Wolfe on the left and the Marquis de Montcalm on the right. Between them sits a Native Canadian gazing down on the railroad that will soon cross the vast new nation. The red serial number indicates that this note was issued at Toronto. Dominion notes were issued in denominations of 25 cents, $1, $2, $4 (from 1882 to 1911), $5 (after 1911), $500, $1,000, and also $5,000 and $50,000 for use only between banks. Dominion of Canada, 25-cent note, 1900. The only fractional government bank notes ever issued. The first issue, dated 1870, was intended to help replace American silver coins. Later versions issued in 1900 and 1923 were popular gifts. Note the intricate guilloche pattern behind the central number and in the border. The allegorical figure of Britannia appears at the right. Dominion of Canada, $1, 1911. The use of sophisticated engraving and printing techniques is becoming apparent with this note. It features finely engraved portraits of Earl Grey, Canada's ninth Governor General, and his wife Lady Grey. Note the signatures. That on the left was applied by hand by a government official; that on the right was engraved on the plate. Dominion of Canada, $5, 1912. The first $5 note issued by the Dominion government features the passenger train The Ocean Limited on the Intercolonial Railway in Nova Scotia's Wentworth Valley and carries the actual signatures of the comptroller of the currency and the deputy minister of finance, reproduced as part of the printing process. The Finance Department seal was applied to reassure the public that, despite this innovation, the note was legal tender.