In 1685, the French colonial authorities issued the first paper currency in North America. Faced with a shortage of coins with which to pay his troops, De Meulles, the Intendant of New France, introduced as a temporary expedient an issue of paper currency. The notes were made from playing cards and the local merchants were directed to accept this 'playing card money' with the understanding that it could be redeemed for bills of exchange in France before the supply ships returned to France in the autumn.

In subsequent years further issues were made but the practice was abandoned in 1717 due to a failure of the government to always redeem the notes in full. However in 1729 a severe shortage of coins forced the resumption of the issue of paper currency. The new issue was on plain white cardboard instead of playing cards and was followed by further issues, with the last in 1757. The 'card money' was issued in various denominations, with each denomination having its own distinctive shape. The notes were impressed with two official seals and, like the 'playing card money', were handwritten.

The piece shown was signed at the top by the Clerk of the Treasury Board, in the centre by La Jonquiere (Governor 1749-52) and at the bottom by Bigot (Intendant 1747-60). The two oval seals at the top right are those of France and Navarre. The 'card money' also eventually fell into disrepute because of over-issue and difficulties with redemption. The piece illustrated is part of the National Currency Collection, Bank of Canada. 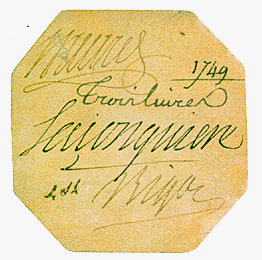