Prince Edward Island, like the other pre-Confederation British North American colonies, often lacked the small change necessary for transacting business. The need for larger denominations was filled by government treasury notes and notes of the New Brunswick and Nova Scotia banks. One of the ways in which the merchants of the island combatted the lack of change was to issue their own notes. The most unusual of these private issues was by William Fitzpatrick, a Charlottetown shoemaker. Instead of having his notes printed on paper, Fitzpatrick used leather made from sheepskin. These are the only negotiable merchant's notes of leather that were used in Canada. They are also unusual in that the government was involved in their redemption. Fitzpatrick made a special arrangement with the government whereby he issued an amount of his notes equal to a quantity of gold he had deposited in the treasury. In return, the treasury would pay out treasury notes for any of the leather notes presented for redemption. One of the few surviving examples of the issue is illustrated. It is in the National Currency Collection, Bank of Canada. 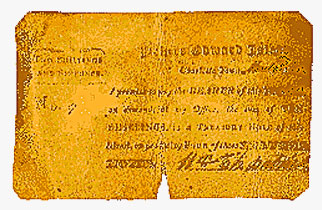