You are: Home » Banknotes » Articles » The Canadian Landscape Series: 1954 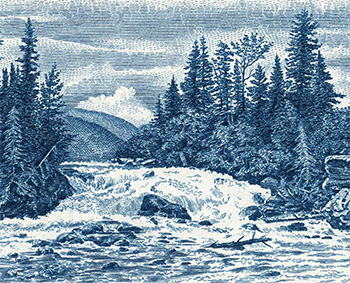 With the ascension of Queen Elizabeth II to the throne in 1952, the Bank began planning the third series of Bank of Canada notes. Although the colours and bilingual text were retained, significant changes to the design gave the new series a distinctly modern look.

The design shift reflected a growing sense of Canadian nationalism. An internal Bank briefing document from the early 1950s stated that: The traditional ornamentation of bank notes reflects a Victorian taste in design... However, elaborate ornamentation is not consistent with Canadian taste–particularly ornamentation which is derivative from times associated with an immature, colonial status.

The Bank contracted noted Canadian artist Charles Comfort (later appointed Director of the National Gallery of Canada) to develop a more contemporary design for Canada's currency. The elaborate detail of earlier issues was simplified, and the allegorical figures on the backs of the notes were replaced with Canadian landscapes. Representing typical Canadian scenes, the landscapes were chosen by Bank officials over a six-month period from more than 3,000 photographs supplied by the National Archives, Canadian Pacific, and several news agencies. In choosing the photos, the following conditions were imposed: no large buildings, rural rather than urban in character, little evidence of human or economic activity, and no well-known scenes. The resulting series of notes, while undoubtedly Canadian in character, gives an overall impression of a vast land dominated by the forces of nature. 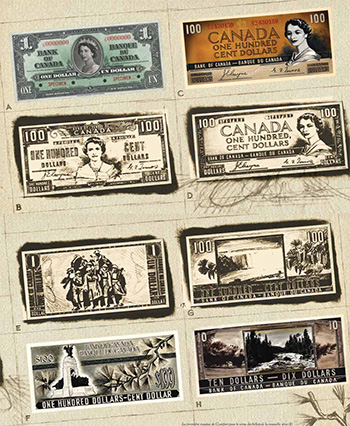 Evolution of a Design

The first models proposed for the new series by CBN (A) were too close in style to the 1937 notes, retaining the elaborate scrollwork, framed central portrait, lettering, and even the background pattern. Comfort's early sketch for the $100 note (B) has a simpler typeface and border with a modern, unbounded portrait. As discussions with the Bank continued, Comfort's proposals for the face of the note (C and D) can be seen moving towards something very close to the final design.

Comfort's first proposal for the back of the new series (E) features a grouping from the National War Memorial. His next (F) spotlights the entire cenotaph, which he favoured for the series when it was thought that the same design would be used on the backs of all denominations. When the Bank decided that this image might be too emotionally loaded, it suggested landscapes, and Comfort produced sketches featuring Niagara Falls (G) and later a more generic landscape (H) in which the border can be seen to be moving in the same direction as that on the face. All three of the last proposals include pine branches by Winnipeg wood engraver, Eric Bergman. The use of horizontal bands instead of an enclosed border was not favoured by the printing companies.

To foil future counterfeiting attempts, the images selected became the sole property of the Bank–the suppliers were required to sign over rights to the images and to destroy all negatives and copies in their possession. The image of Canada's coat of arms was first introduced in this series and formed part of the background design on the face of the note.

The 1954 issue was also the only series to include the reigning monarch's portrait on every denomination. The portrait was moved again–from the centre of the bank note to the righthand side, where it was less susceptible to wear caused by folding–and the decorative frame around each portrait was abandoned.

The Bank wanted a unique portrait of the new Queen for the series. The designers created one by modifying a photograph that had been taken by famous Canadian photographer Yousuf Karsh for the 1952 Canadian 2-cent stamp. On the stamp, the Queen was shown facing right and wearing a diamond tiara. For the bank notes, the tiara was removed, and the image was reversed so that the Queen faced left. The modified portrait, approved by the Queen, was engraved by George Gunderson, a master engraver at BABN.

Gunderson's engraving gave the first issues of the 1954 series its nickname–the Devil's head notes. In the original engraving, highlighted areas of the Queen's hair gave the illusion of a grinning demon behind the ear.

In late 1955, the Bank had begun work to revise the engraving to eliminate the problem. In March 1956, the Bank ordered both bank note printers to modify the printing plates by darkening the highlights in the Queen's hair. Meanwhile, a storm of controversy was brewing in Canada and overseas. H.L. Hogg, a British alderman, expressed the outrage felt by many about the devil perched on Her Majesty's ear. The Devil's face is so perfect that for the life of me I cannot think it is there other than by the fiendish design of the artist who is responsible for the drawing or the engraver who made the plate, Hogg wrote to the High Commissioner for Canada in March 1956. I enclose an envelope for the return of the note but I would be better pleased if you told me you had burned it. 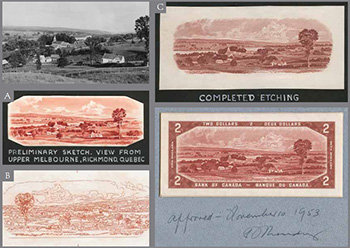 Creating a Landscape. From the original photograph, the engraver creates a watercolour sketch (A), followed by a line drawing for the etching (B). The final etching (C) is then produced, and the back of the note is submitted for approval. National Currency Collection

The 1954 notes were 15.2 cm long and 7 cm wide–3.3 mm narrower than those of previous issues. The change was made for technical reasons.

To reduce costs and to meet an increasing demand for notes, note production itself changed significantly. The composition of the paper became 50 per cent flax and 50 per cent cotton. The faces of the notes were printed using one intaglio plate (instead of two) and two lithographic plates, and, in 1965, the Bank authorized the printers to begin printing 40 notes to a sheet of paper instead of 32. The application of official signatures to the bank notes also changed; the Bank stopped applying the signatures by letterpress and, instead, authorized the engraving of signatures directly onto the intaglio plates. 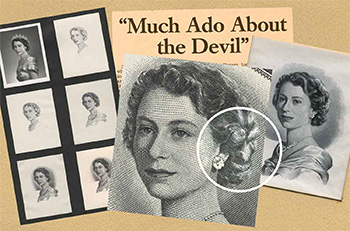 Born in 1910, George Gunderson attended the Ontario College of Art and the Académie Julienne in Paris. He was employed by the Bureau of Engraving and Printing in Washington, where he produced several American stamps. Upon joining the British American Bank Note Company in Ottawa, he received instruction from Harry P. Dawson. The quality of his work gained him renown as a letter and picture engraver, and he eventually became the company's Art Director. He prepared the original, so-called Devil's head, portrait of the Queen that appears on all denominations of the 1954 issue. He also engraved the Queen's portrait on $1, $2, and $20 notes in the 1969–79 issue, as well as those of Macdonald and Mackenzie King on the $10 and $50 notes of that issue. He produced the view of Moraine Lake on the back of the 1969–79 issue $20 note and, along with his colleague, C. Gordon Yorke, the image of the salmon seiner in Johnstone Strait on the Pacific Coast that appeared on the back of the 1972 issue $5 note. George Gunderson retired in 1973 and died in April 1975.

Initially printed by CBN and later by BABN as well, the face of the $1 note features an engraving of Queen Elizabeth II based on a Karsh portrait that appears on all denominations in the series. The portrait was moved to the right to eliminate wear from folding. It was felt that the change from a decorative frame to a soft vignette would make counterfeiting more difficult. The Saskatchewan prairie scene on the back was engraved by Carl Louis Irmscher of ABN.

The $2 note was printed by BABN. The back of the note, which features a view of the Saint-François River from Upper Melbourne, Richmond, Quebec, was engraved by BABN's Harry Dawson. Note that the same border design is used on the front and back of the notes in this series.

Until 1959, the $5 bank note was printed exclusively by BABN. The back of the note was engraved by C. Gordon Yorke of BABN and depicts Otter Falls on the Aishihik River, Mile 996 Alaska Highway, in southwestern Yukon.

The back of the $10 note features Emerald Lake and Mount Burgess in Yoho National Park, British Columbia, and was engraved by Harry Dawson. It was based on a photograph taken for the Canadian Pacific Railway. The $10 note was printed by BABN

The seascape on the back of the $50 note was engraved by Warrell Alfred Hauk of ABN from a photograph taken at Crescent Beach in Lockeport on Nova Scotia's south shore. The $50 note was printed by CBN.

The $100 bank note, printed by CBN, features Okanagan Lake in British Columbia on the back. The scene was engraved by William Ford of ABN.

The $1,000 note was printed by CBN. The back of the note shows the covered bridge in the village of L'Anse-Saint-Jean, Quebec, and, in the background, the Saguenay River fjord. The photo that the engraving was based on was taken by Max Sauer of Montréal.