The First Bank of Canada Notes: 1935 - Articles on canadian banknotes - Coins and Canada 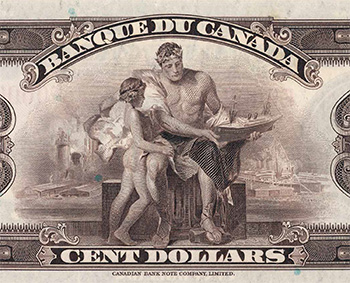 The 1935 series consisted of ten denominations, all but one of which began to circulate on 11 March 1935, the day the Bank of Canada opened for business. The exception was the $25 note, which was issued two months later to commemorate the silver jubilee of King George V. The 1935 series was the last to include $25 and $500 bank notes.

This was also the only unilingual series of notes ever produced by the Bank. Each denomination was issued in separate English and French versions and, apart from the language, the designs were identical. In a May 1935 letter to a colleague in England, Deputy Governor John Osborne noted that the notes were well received by the Canadian public, though the English-speaking population is inclined to mutilate the French notes, and the French population complains they cannot get enough of their own notes.

The design of the 1935 notes closely resembled the formal baroque style of the Dominion notes. The face of each note featured a portrait of a member of the British royal family or of a former Canadian prime minister. Allegorical figures, representing Canada's growing agricultural, industrial, and commercial prosperity, appeared on the backs of the notes. Allegorical figures have been used for centuries to personify abstract concepts or emotions and, in many cases, have become national symbols, such as Britannia and Liberty. This visual interpretation of national ideals made them a common feature on bank notes around the world in the nineteenth and early twentieth centuries. This series was the only one to include the Bank's official seal. 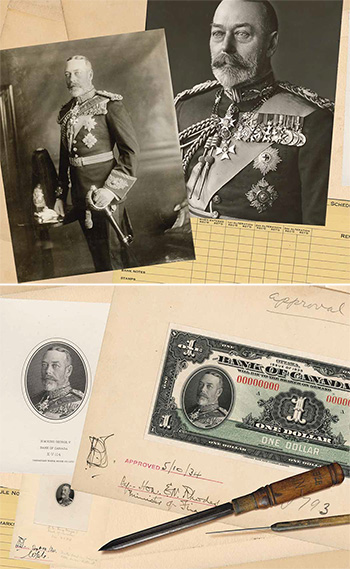 Born in Ireland in 1868, Robert Savage was one of America's most prominent portrait and picture engravers during the first half of the twentieth century. Despite his talents, little is known of his professional life. He joined the American Bank Note Company (ABN) in 1891 and remained in their employ until his death in 1943. He served as Superintendent of ABN's Picture Department for many years, producing images for stamps and bank notes from around the world. Savage is credited with engraving the portraits that appeared on several Bank of Canada notes, including those of King George V on the 1935 series $1 note and the Duke of York (later King George VI) on the $50 note of that series. The latter portrait was also used on six of the denominations in the 1937 note issue.

Another prominent member of ABN's engraving team at this time, Will Ford joined the company in 1912. He succeeded Robert Savage as Superintendent of ABN's Picture Department in 1940 and retired in 1960. In writing the company history in 1959, W. Griffiths called Ford ...the Company's and the world's foremost portrait engraver. Like so many of his fellow workers at ABN, Ford was a second-generation employee. His father Joseph had spent most of his career at ABN testing the security of their product, for which he was nicknamed the honest counterfeiter. William Ford's work spans the first three Bank of Canada note issues. He engraved the portrait of Queen Mary that appears on the 1935 issue $25 note, as well as those of Prince Henry, the Duke of Gloucester, and Sir John A. Macdonald on the 1935 $100 and $500 notes, respectively. The portrait of Prime Minister Macdonald was also used on the 1937 issue $100. Ford also engraved the scenic vignettes that appear on the backs of the $20 and $100 notes in the 1954 issue

There is considerable variation in design from one denomination to another in the 1935 series. While the faces of the notes all feature a large central numeral, the intricate design behind this number varies in each denomination, as do the layout and style of the numerals or words in the four corners. Similarly, on the backs of the notes, the framing of the allegorical figures varies from one denomination to another, together with the layout of the numbers, the outer frame, and the ornate guilloche patterns behind the various design elements.

Notes in the 1935 series were slightly larger than those currently in use. They were printed on 100 per cent rag paper made from 75 per cent linen and 25 per cent cotton. The paper was supplied by Howard Smith Paper Mills Ltd., which later became Domtar. The faces of the notes were prepared using two steel plates: major elements of the design were first rendered in black and then overlaid with a single coloured tint. A letterpress process was used to add the seal, signatures, and serial numbers. The backs were printed in intaglio, using a single colour. Heavy metals in some of the inks gave the new notes their vibrant colours.

As an anti-counterfeiting feature, small green disks, or planchettes, which could be removed by scratching, were scattered throughout the bank note paper. Planchettes were routinely used in papers for official documents, but the green ones were reserved for government documents. Some viewed the planchettes with bemusement. In a 1935 letter, S.B. Chamberlain, the head of St. Luke's Printing Works of London (the official printer of Bank of England notes) questioned the value of those ridiculous little green spots as a security feature. Chamberlain's skepticism notwithstanding, the use of green planchettes in Bank of Canada notes continued into the 1990s.

The Art of Guilloche

The complex, symmetrical patterns of fine lines common to most bank note issues, until recently, are known as guilloche, so-called because they resemble braided ribbons. Guilloche patterns were created on a geometric lathe, which produced a button, usually used whole in some area of the note. This was then cut into strips to form the note's border.

The $1 note was printed by CBN. The front of the note features a portrait of King George V, who reigned from 1910 to 1936. The words Ottawa, Issue of 1935 appear on all the notes. The signatures on this and all other notes in this series are those of Graham Towers, the Bank of Canada's first Governor, and J.A.C. Osborne, Deputy Governor. The allegorical figure representing agriculture was based on a painting by Alonzo Foringer and was engraved by ABN's Will Jung.

The $2 note features a portrait of Queen Mary, wife of King George V. She is shown in evening dress wearing a diamond tiara and necklace. The Queen was photographed by British photographer Hay Wrighton, and the portrait was engraved by two different engravers–Will Ford of ABN and Harry P. Dawson of BABN, the firm that printed the note. On the back of the note is an allegorical figure representing transportation, created by BABN artists.

The front of the $5 note features a portrait of Edward, Prince of Wales, the first son of King George V and Queen Mary. He inherited the throne upon his father's death in 1936 and abdicated that same year in favour of his younger brother, the Duke of York, who became King George VI. Edward is shown wearing the khaki uniform of a colonel. The portrait was based on a photograph credited to the famous British photographer, Vandyke, and owned by the Canadian Department of External Affairs. BABN designed and printed the note, and its master engraver, Harry P. Dawson, engraved the portrait. Dawson also engraved the allegorical figure representing electric power that appears on the back of the note.

The front of the $10 note features a portrait of Princess Mary, only daughter of King George V and Queen Mary. Richard Speaight, official photographer to the royal family, photographed the princess, and the portrait was engraved by BABN master engraver Harry P. Dawson. He also engraveed the back of the note, which features an allegorical figure representing the harvest.

Printed by CBN, the $20 note features a portrait of 8-year-old Princess Elizabeth (granddaughter of King George V and later Queen Elizabeth II). The engraving for the note, completed by Edwin Gunn of ABN, was based on a Marcus Adams photograph of the princess. The image on the back, based on a painting by Alonzo Foringer, shows two allegorical figures representing toil.

This special royal purple $25 note was issued on 6 May 1935 to commemorate the silver jubilee of King George V. It was printed by CBN and features portraits of the King and Queen, engraved by Edwin Gunn and Will Ford of ABN. Louis Delmoce, also of ABN, engraved the image of Windsor Castle, one of the royal family's official residences, that appears on the back of the note. This was the only $25 note ever issued by the Bank of Canada.

The 1935 $50 note, which was printed by CBN, features a portrait of Prince Albert, Duke of York, second son of King George V and Queen Mary. After the abdication of his brother, Prince Albert became King George VI. The portrait of the prince wearing an admiral's uniform was engraved by Robert Savage of ABN from a photograph by Bertram Park. The vignette on the back of the note is an allegorical figure representing modern inventions.

Printed by CBN, the $100 note carries a portrait of Prince Henry, Duke of Gloucester, third son of King George V and Queen Mary. The prince is wearing the uniform of a captain of the 10th Royal Hussars Regiment. The portrait photographer was Vandyke, and the engraving was done by ABN's Will Ford. On the back of the note is an allegorical figure representing commerce and industry.

This was the only $500 note ever issued by the Bank. Printed by CBN, it features a portrait of Sir John A. Macdonald, Canada's first prime minister, wearing a fur-collared coat. Will Ford of ABN engraved the portrait. On the back of the note is an allegorical figure representing fertility.

The $1,000 note was printed by CBN. The front carries a portrait of Sir Wilfrid Laurier, Canada's seventh prime minister. The portrait, which depicts Laurier wearing a Prince Albert coat, was engraved by ABN's master engraver, Edwin Gunn. The back of the note features an allegorical figure representing security. Security was a stock image owned by ABN–the company had used the same allegorical figure as early as 1917 on an issue of Russian bonds.