You are: Home » Banknotes » Articles » Top 10 canadian most valuable banknotes sold at auctions in 2019

Top 10 canadian most valuable banknotes sold at auctions in 2019 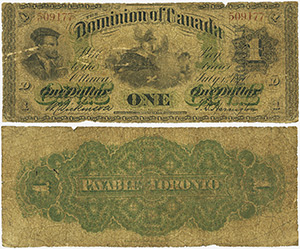 Sold on January 10, 2019, at FUN Auction, Heritage Auctions described this banknote certified by PMG as:

This Payable at Toronto variety features the vertically stamped overprint Manitoba to the right of the central vignette on the front. While this example is quite well circulated, the note remains fully intact. [...] this piece is the sole graded example in the PMG Census. [...] The Manitoba overprint makes it a distinctly special type for Canada, making it comparable to the DC-9c in terms of rarity. That note, also offered here today, realized nearly $25,000 USD just a few short years ago.

Serial number A026907, this banknote signed by Osborne-Towers and certified by PMG is one of only two GUNC-66 known for this variety. It sold at Torex auction on June 2019 by the Canadian Numismatic Company. 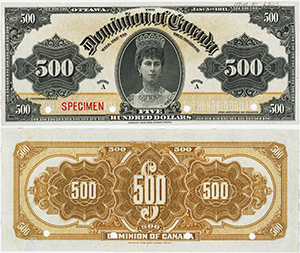 Sold at the same time and same place as the #1 on this list, Heritage Auctions described this banknote certified by PCGS as:

Specimen printings for the early Dominion issues were printed in minuscule numbers with around the same number of surviving examples as the issued examples.

Only 3 circulation issue examples are known to collectors, the last of which sold in 2008 at Long Beach auction for $322,000 CAD. The 3 known are: 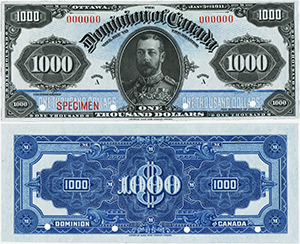 This banknote was part of the Solovey Russian Collection. Certified by PMG, it also sold on January 10, 2019, at FUN Auction and by Heritage Auctions. Only 2 circulation 1,000 dollars 1911 banknotes are known, one in private hand and the other owned by the National Currency Collection:

Heritage Auctions described this banknote as:

The note has four small POCs in the signature spaces, solid zero serial numbers, and is stamped SPECIMEN in red in the lower left corner. PMG notes that this example has been previously mounted although that evidence is faint and difficult to locate through the holder. 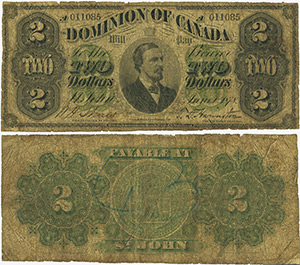 Only 6 circulation 2 dollars 1878 - St. John are currently known, 3 in private hands and 3 in institutional collections, all in low grades: 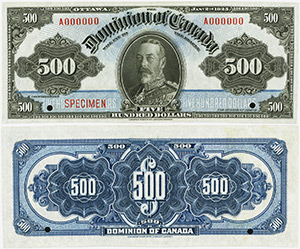 Noted as previously mounted by PMG, this banknote from the Yuri Solovey Collection of Canada sold on January 10, 2019, at FUN Auction, Heritage Auctions. Only 7 circulation 500 dollars 1925 are currently known, 6 in private hands and 1 owned by the National Currency Collection: 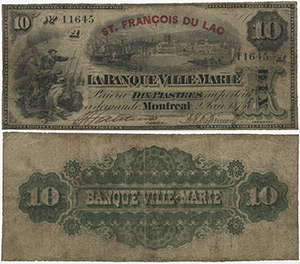 This is the only one 1873 Banque Ville-Marie 10 dollars 1873 known with St. François du Lac overprint known.

It first sold uncertified on Ebay in September 2016. It sold by Geoffrey Bell Aucions at Toronto Coin Expo Fall Sale on October 4, 2019 and was certified PMG F-15. 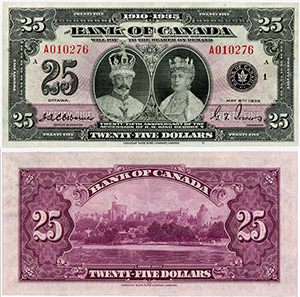 This banknote was sold by The Canadian Numismatic Company at Torex Auction in February 2019.

This special royal purple $25 note was issued on May 6, 1935 to commemorate the silver jubilee of King George V. It was printed by CBN and features portraits of the King and Queen, engraved by Edwin Gunn and Will Ford of ABN. Louis Delmoce, also of ABN, engraved the image of Windsor Castle, one of the royal family's official residences, that appears on the back of the note. This was the only $25 note ever issued by the Bank of Canada. 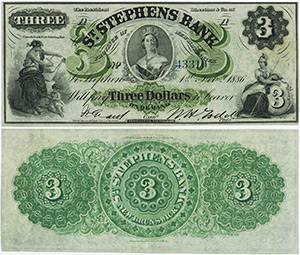 Finest known 3 dollars 1886 St. Stephens banknote among the only 5 known, including 1 owned by the National Currency Collection.

This PMG banknote was from the Harry M. Eisenhauer Collection. 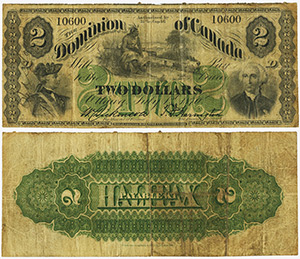 Among the finest known, this PMG VF-20 banknote from the Harry M. Eisenhauer Collection is one of the only 16 2 dollars 1870 Halifax Dominion of Canada both in private hands and in institutional collections. It sold in April, 2019 in Chicago.

Only one other example, also certified by PMG is currently known. This variety was issued in Ottawa, the seat of government, and payable at Halifax, Nova Scotia. 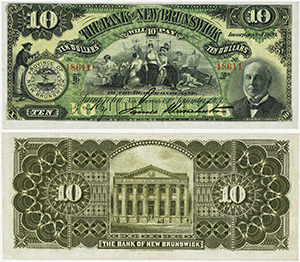 By Heritage Auctions, this banknote sold in April, 2019 in Chicago. It was described as:

Featuring the second signature title, that of General Manager, this note is the single finest graded of only four examples currently graded in the PMG Population Report. The engravings are intricate and exacting.