A coinage of its own: The Province of Canada's Large Cents 1858-59 - Articles on canadian coins - Coins and Canada

You are: Home » Canadian coins » Articles » A coinage of its own: The Province of Canada's Large Cents 1858-59

After the Province of Canada was formed in 1841 through the union of the colonies of Lower Canada and Upper Canada, the new government decided to mint coins for the new Province because coins were scarce. But it took many years to persuade the British government that it was in the best interests of both Canada and Britain.

As Haxby and Willey write:

The principal leader in the Province of Canada's struggle for its own coinage was Sir Francis Hincks, Inspector General (1848-54), Prime Minister (1851-54) and later Minister of Finance of the Dominion of Canada. Legislation establishing the Province's decimal coinage consisted of several steps that took almost a decade. Initially there was strong British opposition.

The first step, in 1850, consisted of the Legislature of the Province of Canada passing an act giving the government the right to have its own coinage, distinct from that of Britain. The act proclaimed the coins were to be struck in pence, shillings and pounds. But as Haxby and Willey note:

The British government disallowed the act, partly because it was felt that the regulation of coinage was the prerogative of the Sovereign and use of English currency facilitated trade with the Mother Country.

Although the Canadians did not get their way, they did not give up their desire for their own coins. So the next year, the Legislature passed a second act, this one advocating a decimal currency with the public accounts being kept in dollars, cents and mils.

Haxby and Willey write that while the...

...English Treasury viewed the second act with disfavour, [the Treasury] did not disallow it. Instead, it was proposed that the province have its own pound and that it could be divided into decimal units if necessary.

So in 1853, a new act was passed to establish Canadian currency which included pounds, shillings and pence as well as dollars, cents and mils, with the public accounts in the new decimal system. As Haxby and Willey write:

The striking of coins was left to the Queen's prerogative and non was issued under this act.

Four years later, in 1857, the decimal system was finally established, with the Canadian dollar equal to the US dollar, while the English pound was worth $4.46.

The Charlton Standard Catalogue of Canadian Coins notes that after...

...the decision to adopt decimal coins was approved, a number of designs, sizes and compositions were considered for the cent.

The final size chosen was a bronze coin with a diameter of 25.4 mm, weighing 4.54 grams. These coins could also be used as a measuring unit, with each coin on inch in diameter, while 100 new coins weighed 100 avoirdupoid pounds.

The coin that was finally approved consisted of a youthful-looking Queen Victoria facing left wearing a laurel wreath in her hair on the obverse, surrounded by a beaded circle with the legend: VICTORIA DEI GRATIA REGINA CANADA. It was designed and engraved by Leonard C. Wyon of the Royal Mint.

The reverse, also by Wyon, consisted of the words ONE CENT and the date surrounded by a vine of 19 maple leaves. The Canadian government ordered 10 million large cents, but since the coining process did not begin until the end of 1858, only 421,000 cents were minted with the 1858 date. For this reason, this coin is considered one of the key dates in the entire Canadian Queen Victoria large cent series. 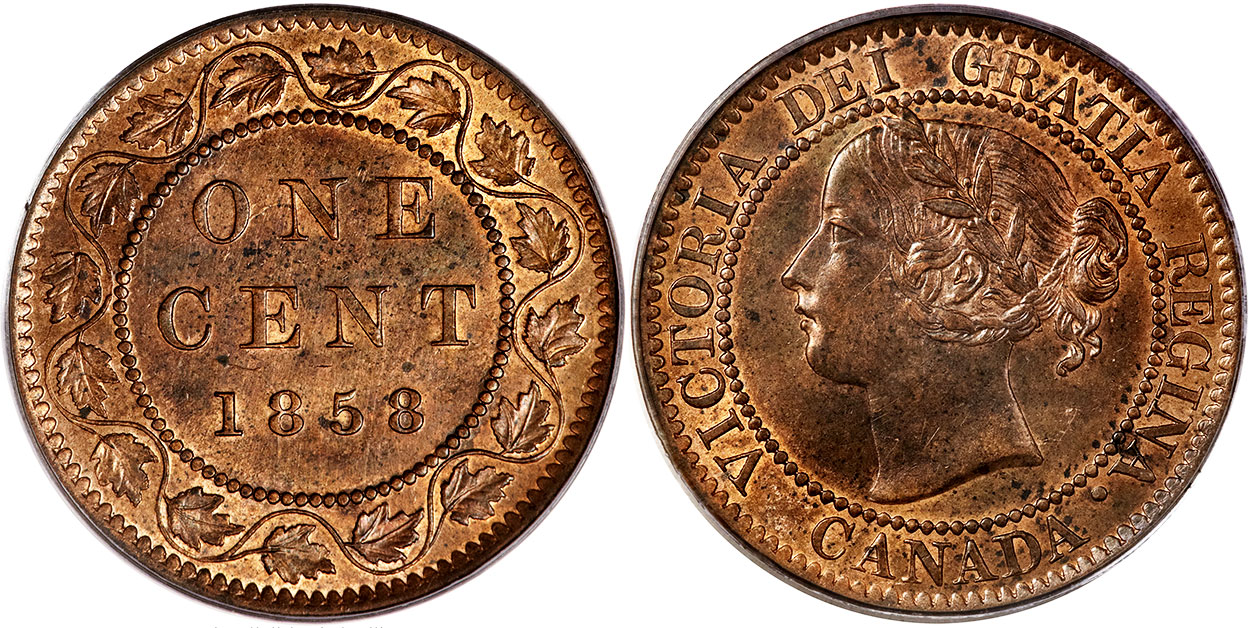 The first large cents were struck in 1858 and are considered to be the key date of the entire series as only 421,000 were struck. The obverse of the large cents cary the effigy of the young Victoria engraved by Leonard C. Wyon.

In 1859, the mint produced 9,579,000 one cent coins, a huge number given the size of the population of Canada and the fact that large numbers of copper tokens had recently flooded the market.

Although large cents dated 1859 can be found quite easily, there are several varieties of this date that are not only very interesting, but some of them are quite difficult to acquire. In fact, one of them can be considered quite rare. Charlton writes:

The first 1859s were undoubtedly overdates, on which a special wide 9 punch was employed to alter the second 8 to a 9, produced from several 1858 dated dies.

While the first 1859 coins were produced with overdates, Charlton says the...

...majority of the 1859 dies were not overdates: they were dated with a narrow 9 punch. Many such dies were made and numerous repunching varieties exist.

The 1859 with a narrow 9 is very easy to acquire because of the great number of coins that were struck with the narrow 9.

The other varieties are another matter: The most available variety has a wide 9 over the 8. This variety can be purchased from many coin dealers specialising in Canadian coins.

...a die defect causing a small tail at the lower left of the 9.

This D-P N9-1 is the most difficult of the double-punched varieties to obtain.

The D-P N9-2 variety differs its D-P cousin in that traces of the original 9 appear on the left side of the 9. While this variety is easier to obtain than D-P-1, it can still take some time to find one.

The rarest of the 1859 varieties is made of brass. It has a plain narrow 9 but has a different colour than its bronze counterparts. Brian Cornwell of the International Coin Certification Service has only graded approximately 15 brass 1859 one cent coins. All have only been in lower grades, ranging from G-4 (Poor) to F-15 (Good Fine). Examples of this variety in VF or higher grades are unknown.

Cornwell says there are two ways to test whether a Canadian 1859 large cent coin is made of bronze or brass. The first way is to use sophisticated equipment to test the coin's specific gravity. Bronze and brass coins will have slightly different specific gravities.

Another way is to use a diamond or piece of glass t oplace a tiny nick on the edge of the coin and then use a microscope to see whether the colour of the coin where it is nicked is pink (bronze) or yellow (brass).

Because so few of these coins are put up for sale in major auctions, it can take years for collectors to even bid on this coin. Cornwell estimates there are fewer than 50 of these coins in collector's hands at the moment. When they do go on sale, they ca be quite costly. A few years ago, an example of this variety in VG condition sold for Canadian $3,500.

As more and more collectors seek to add this coin variety to their Canadian large cent collections, the cost in any grade will no doubt increase.