To help you to identify die clash on canadian coins.

The die clash possibilities of 1-cent canadian coins are rather frequent for certain periods of years. Furthermore, the maple leaf on the reverse was always on this denomination, except for the year 1967. 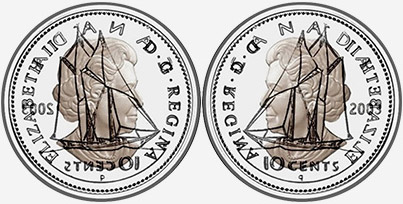 Since 1937, the 10-cents coin design on reverse is the Bluenose. Bluenose sank near Haiti, January 28, 1946 and the wreckage was never found.

The choice to produce a 20-cents by the Bank of Upper Canada, instead of a 25-cents one, cause people to easily be confused with the US 25-cents coin, which was very common and circulating in Canada at that time.

When the Dominion of Canada struck his first coin, he opted instead for the 25-cents denomination and all the 20-cents coins previously produced were gradually withdrawn from circulation. 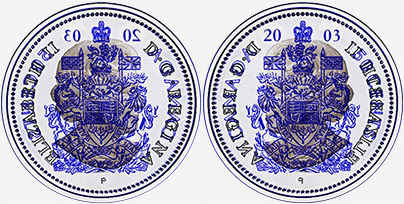 The last year of a 50-cents circulating coin was minted in 2001. It continued to be produced later for collectors. A commemorative 50-cents coin was issued in 2002.

The first 2-dollars coin in Canada was issued in 1996.