Prince Edward Island was the last of the British North American colonies to adopt a decimal system of currency. 'Going decimal' in 1871, the island chose a dollar equal in value to the United States one-dollar gold piece, in line with the decimal currency system introduced earlier in the Provinces of Canada and New Brunswick and adopted by the Dominion of Canada in 1867. The only decimal coin struck for P.E.I. prior to its entry in Confederation in 1873 was a one-cent piece in 1871. This attractive coin was designed and engraved by Leonard C. Wyon, who for some forty years was the principal engraver for the Royal Mint in London

The obverse of the coin depicts a diademed head of the queen, a design that was already being used for the Jamaica halfpenny. The reverse was adapted from thc official seal for the island. The central design shows a large oak tree (representing the United Kingdom) sheltering three smaller ones (the three countries of the island) with the Latin phrase PARVA SUB INGENTI ('The small beneath the great') below. Because of heavy pressure of work on other coinage, the Royal Mint was forced to contract with the Heaton Mint in Birmingham (a private firm) to produce the Prince Edward Island cents. The specimen illustrated is part of the Bank of Canada's Currency Collection. 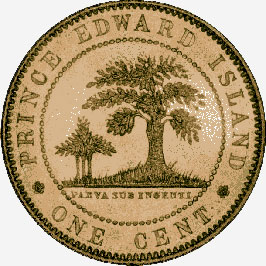