You are: Home » Canadian coins » Errors and varieties » Clipped Planchet

To create the blanks, uncoiling metal strips are fed through straightening machines and the blanking press. These metal strips weight around 1,700 lbs and are sometimes made inside the Royal Canadian Mint, but mostly imported. For each blanking press (3), 400 to 600 punches can be made per minute. Each punch produces 24 blanks.

During the punching process, several issues might cause a clipped planchet error including the misalignment, the speed or the slippery of the metal strip, causing the punches to partly overlap the strip ends or holes.

Once created by the blanking presses, the blanks pass through a vibrating screen with holes just large enough to keep only those that are completely round and with a perfect diameter. Normally, the incomplete blanks fall under the vibrating mat and will subsequently be melted. But some of the defective blanks manage to made it, are struck and then release in circulation.

This is the most common clip and it occurs when a blanking die (punch) overlaps a previously-punched hole on the metal strip.

A curved clipped planchet with a cut of 70% and more is called Crescent Clip.

It occurs when a blanking die (punch) overlaps two holes (previously-punched) on the metal strip.

A double curved clipped planchet with two cuts in opposite directions is called Bowtie Clip.

It occurs when a blanking die (punch) overlaps three holes (previously-punched) on the metal strip.

It occurs when a blanking die (punch) fall on the edge (mostly caused by a misalignment of the strip), the beginning or the end of the metal strip. The texture of the edge of the blank may vary depending on the metal strip used.

Like the straight clip, it occurs when a blanking die (punch) fall on an irregular edge, the beginning or the end of the metal strip. Ragged clips may be confused with other planchet errors.

It occurs when a blanking die (punch) fall on the two edges of the metal strip.

Near the edge, the legend or part of the design (often beads or denticles) of a clipped coins is elongated due to the uneven pressure when struck. Normally the collar used in the striking process have the role to contain the overflow of the metal. On a clipped blank, because the interior of the cut doesn't touch the collar, the design is elongated when struck near the clip.

The counterfeit of clipped planchet errors exists. The following can help to differentiate between a clip coming out of the Royal Canadian Mint and a counterfeit one:

How to calculate the percentage of a clip 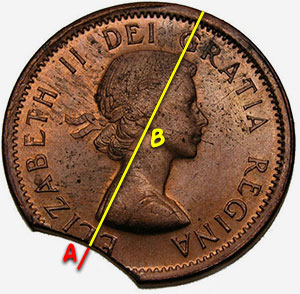 To calculate the percentage, it is necessary to measure the missing part in relation to the diameter of the clipped coin. A/(A+B) = %.

The value is based on the percentage, date of the coin, type of the clip, grade and denomination. There are mostly 1-cent clipped coins out there, but this error can be found on all denominations. Here are some prices realized at auctions: