You are: Home » Canadian coins » Errors and varieties » Uncentered broadstrike 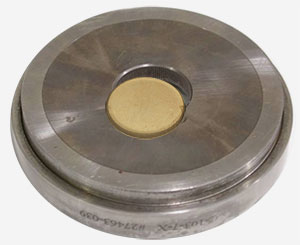 In addition to the obverse die (anvil) and the reverse die (hammer), striking a coin requires a third die called collar. This collar makes it possible to obtain a precise diameter for each coin of the same denomination and it contains the overflow of the metal when the blank is struck.

Sometimes a blank does not fall completely into the striking chamber. This blank may partially rests on the collar (off centered). When this happens, it is partially struck. The collar, by the pressure of the strike, will follow the downward movement and then rise again without the coin being folded up, then it will be ejected normally.

This coin is struck on both sides almost identically in percentage, which differentiates this error from a misaligned die.

How to calculate the percentage of an uncentered broadstrike 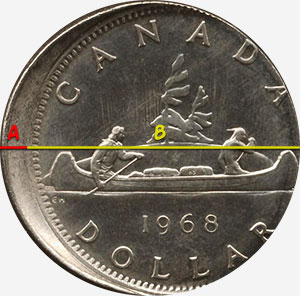 To calculate the percentage, it is necessary to measure the missing part of the design in relation to the diameter of the coin. A/(A+B) = %.

The value is based on the percentage, date of the coin, grade and denomination. Uncentered broadstrike coins with visible date will be more valuable than coin withtout the date. Here are some prices realized at auctions: