Between 1492 and 1825 Spain enjoyed a virtual monopoly in the world's gold production, with nearly 70 per cent coming from the Spanish colonies in the Americas. A substantial amount of the gold mined was used in the production of gold coins by the various mints established in the Spanish colonies. The largest gold coin struck was the 8-escudo piece more commonly known as the doubloon. These gold doubloons and their fractions, as well as Spanish silver coins, circulated extensively in Canada and parts of the United States until the middle of the 1850s.

In the provinces of Upper and Lower Canada, Nova Scotia, New Brunswick and Prince Edward Island, the doubloons along with other foreign gold and silver coins were made legal tender and their rates were fixed by proclamation; however, sometimes they were exchanged and valued only by their weight. The early doubloons had a fineness of 916 2/3 which was retained until 1772, when it was lowered to a fraction above 90 per cent pure gold. The later doubloons struck after 1786 at Spanish colonial mints contained only 87.5 per cent pure gold, and are slightly larger than the Canadian silver dollar. The coin illustrated is a doubloon struck at the mint in Mexico City in 1799. It bears the bust of King Charles IV of Spain and is part of the National Currency Collection, Bank of Canada. 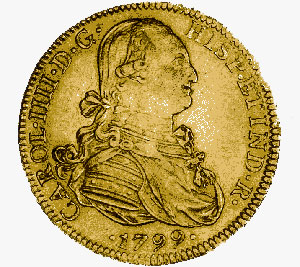