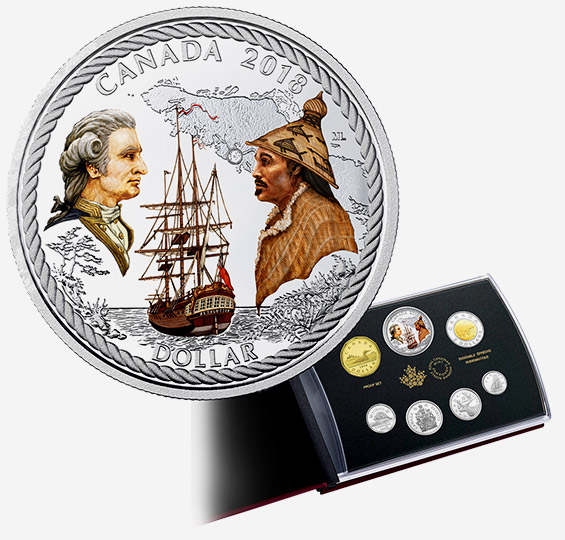 Artist Maskull Lasserre combines elements of cartography, portraiture and maritime history to craft a historical representation of Captain Cook at Nootka Sound. Framed by nautical rope, the tree-lined coast edges the scene and suggests Cook's presence at Nootka Sound as viewed from the perspective of the Mowachaht people. A chief, wearing a distinctive hat associated with Mowachaht expertise in hunting whales, faces Cook and HMS Resolution, which was anchored in a cove on today's Bligh Island. Selective colour highlights the chief, the vessel commanded by Cook, and a profile portrait of the legendary navigator, who seemingly meets the whaler's gaze. In the background, the topographic map of Vancouver Island is a nod to Cook's legacy as a cartographer, while a circular location marker provides geographic context to this historic event. The reverse includes the engraved word CANADA and the face value DOLLAR. The obverse features the effigy of Her Majesty Queen Elizabeth II by Susanna Blunt.

Designed by Julius Csotonyi, the most fearsome predators of the Late Cretaceous Period, some 68-66 million years ago. This depiction of Tyrannosaurus rex is based on current scientific knowledge, and has been reviewed for accuracy by palaeontologists of the Royal Tyrrell Museum of Palaeontology in Drumheller, Alberta. The three-quarter view allows for the careful study of T. rex's famous facial features, including the serrated teeth that line its powerful, bone-crunching jaw. The obverse features the effigy of Her Majesty Queen Elizabeth II by Susanna Blunt. 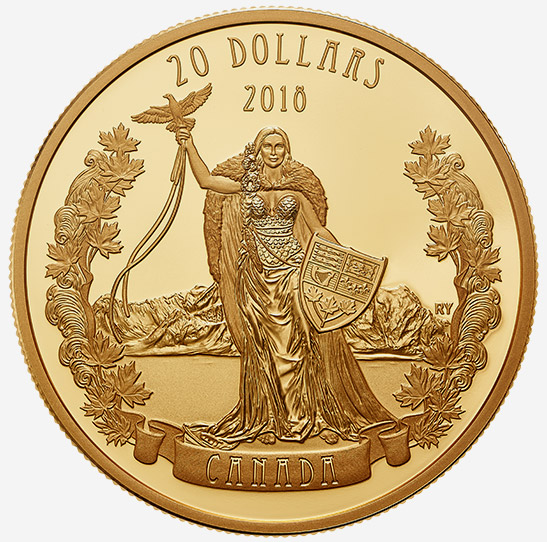 Building on the classic concept of a female national personification, artist Rebecca Yanovskaya offers a modern allegory for a modern Canada. Framed by waves and maple leaves that unite land and sea, Borealia is the image of strength and confidence as she stands against the majestic backdrop of Canada's tallest peak, Mount Logan. Like the British figurehead Britannia, Borealia is clad in traditional robes, but with armour that hints at Canada's journey since the colonial era. Every engraved element in this design carries deeper symbolic meaning, including those that allude to the weight of history: the fur cape that represents Canada's pre-Confederation past; the feather that pays tribute to Indigenous Peoples; and the poppies of remembrance woven into her hair. In one hand, Borealia holds the shield of the Arms of Canada; in the other, a dove of peace–a nod to Canada's historic role as peacekeepers, but also to Canadians' desire for peace. With one foot reverentially set in the past, her name is an ode to one of the proposed names of our country leading up to Confederation: Borealia. Your coin includes the engraved year 2018, the word CANADA and the face value 20 DOLLARS engraved on a scroll banner. The obverse features the effigy of Her Majesty Queen Elizabeth II by Susanna Blunt. 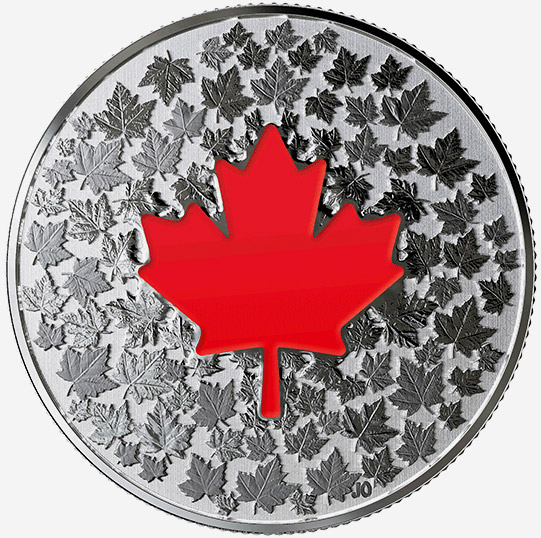 Designed by Canadian artist José Osio, this coin is a symbol of Canadian identity with the maple leaf front-and-centre. A finely engraved mix of different-sized maple leaves fills the field and conveys a sense of spirited celebration behind the large, red-coloured maple leaf that is at the heart of the design. Photo-luminescent technology adds a backlit effect to the prominent maple leaf and a bright green glow to select leaves that surround it. The obverse features the effigy of Her Majesty Queen Elizabeth II by Susanna Blunt. 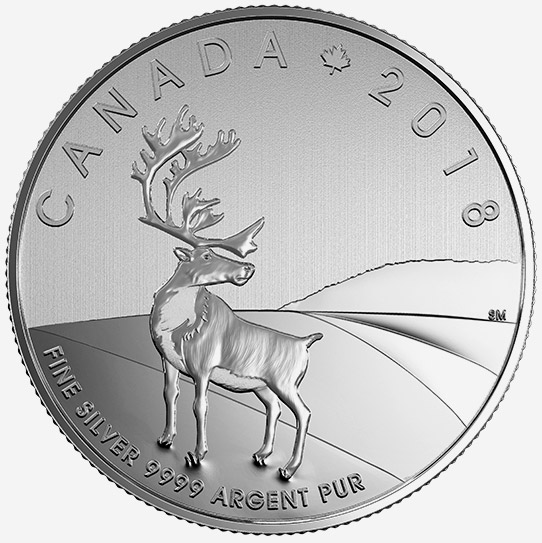 Designed by Steve McPhee, this coin presents a contemporary portrait of the caribou in the Canadian wilderness. The ungulate is positioned slightly left-of-centre, where it strikes a majestic pose as it turns its head and looks towards the right side of the coin. Viewed in side profile, the caribou's rack of antlers adds to its imposing stature, with the main beam rising skyward while the brow-tines point forward above its muzzle. The obverse features the effigy of Her Majesty Queen Elizabeth II by Susanna Blunt.