The Royal Canadian Mint is delighted to join the party by issuing a special edition, 99.99 per cent pure silver dollar immortalizing the Calgary Stampede. This crafted collector coin is a tribute to a uniquely Canadian tradition, made world-famous for its spectacular celebration of the culture and spirit of the old west. 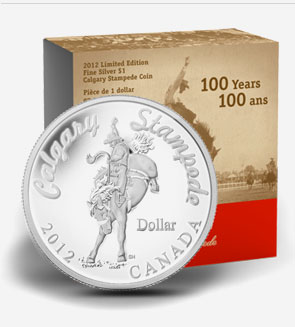 Whether Canadians have the opportunity to attend the Calgary Stampede for its centennial, the Royal Canadian Mint's newest proof silver dollar coin offers a unique chance to celebrate this milestone event.

The Mint is proud to add this milestone in Stampede history to a growing list of collector coins which promote and preserve Canada's history, culture and values.

Canadians take great pride in their heritage and for 100 years, the Calgary Stampede has been a unique celebration of Western Canadian culture and tradition.

The Government of Canada congratulates the Royal Canadian Mint in capturing the true spirit of the Stampede and sharing this anniversary with the rest of Canada.

It is an honour that the Royal Canadian Mint created a silver dollar coin to commemorate the Calgary Stampede's centennial year.

The Stampede has become a cultural touchstone in Canada and around the world; it is an event that everyone can take part in.

Since working cowboy and vaudeville performer Guy Weadick convinced four Calgary ranchers to help him launch the first Frontier Days and Cowboy Championship Contest in 1912, the festival which became known as the Calgary Stampede has hosted millions of visitors in a uniquely Canadian celebration of the romance and culture of the old west. That spirit comes alive on a coin designed by artist Steve Hepburn, who has produced a powerful and compelling depiction of the Stampede's classic bronco riding event.

The frosted image of a cowboy resolutely fighting to control his fiercely bucking horse leaps out against a gleaming silver background. It is a textbook illustration of the words Calgary Stampede, which also appear on the coin in a Western typeface evoking the look of an old-time rodeo poster. Limited to a world-wide mintage of only 10,000 coins, this precious collectible retails for $69.95 CAD.