During the first half of the 19th century there was a chronic shortage of small coins in Lower Canada. In 1835, following a government decision to remove all the lightweight pieces from circulation, the shortage became acute. No official coins were issued but the Bank of Montreal, the Quebec Bank, the City Bank and La Banque du Peuple were given authority to issue penny and halfpenny tokens of a weight similar to that of British copper coins.

The obverse of these tokens portrays the standing figure of a habitant in winter dress, with his tuque, frock overcoat of homespun with hood, moccasins, sash and whip. It was thought that the figure resembled Louis-Joseph Papineau, a leader of the Rebellion of 1837, and the tokens became known as 'Papineaus.' The reverse depicts the arms of the City of Montreal, with the name of the issuing bank on the ribbon, the date l837 below and the words BANK TOKEN ONE PENNY. The habitant design was subsequently revived on tokens issued by the Quebec Bank in 1852, and for several decades bank tokens made up a large part of the small coins in circulation.The token illustrated, about the size of a silver dollar, is part of the National Currency Collection. 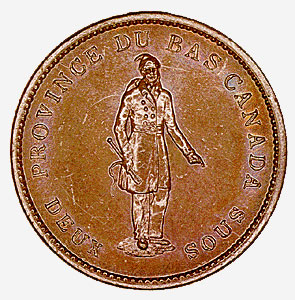