You are: Home » Tokens and medals » Articles » Bank Tokens 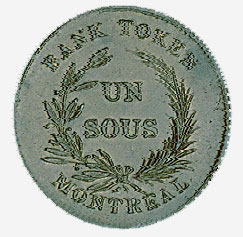 Banks did more than simply issue paper money. In the 1830s, they began to import large numbers of tokens from England. The Bank of Montreal, for instance, imported both anonymous tokens and tokens stamped with its name. The Banque du Peuple also issued a 1-sou token in Montreal. It became known as the "rebellion sou," because the star and Phrygian cap (symbols of republicanism) that it bore were supposedly added by an employee sympathetic to the rebellions that broke out in 1837 in Lower Canada.

These bank tokens were used alongside merchants' tokens. Most of the latter were of poor quality. In the late 1830s, in order to impose some order on the issuing of tokens and to get rid of "junk" tokens, three banks in Montreal along with the Quebec Bank decided to participate in the issue of a new series of tokens. These tokens carried the image of a habitant on one side, and the coat of arms of the City of Montreal and the name of the issuing bank on the other. They were popularly known as "Papineaus." 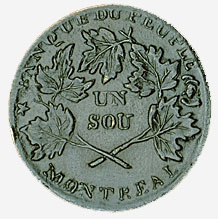 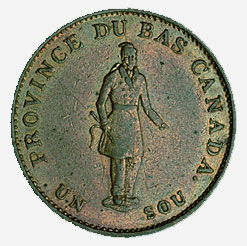