Illustrated is the obverse of one of the most interesting and, at the same time, most puzzling of the various coppers issued privately in Canada in the last century. Called the VEXATOR CANADIENSIS tokens, this group of crudely executed pieces was struck after 1830 bearing the false date 1811. It is now believed that these tokens were intended not only to serve as change but that they also had a satirical purpose. The Latin legend on the reverse translates: "Wouldn't you like to catch them?" The obverse legend can be translated two different ways, depending upon how one interprets the vague third letter in the first word.

If it is an X (making VEXATOR) then the translation would be "The tormentor of Canada." In this case the tokens could, by implication, be criticizing one of the governors of Lower Canada or George IV, in asking "wouldn't you like to catch the issuers of these coppers?" On the other hand, if the letter is read as an N (making VENATOR) the translation would be "A Canadian trapper." The reverse legend could then refer just as well to fur-bearing animals as to the issuers of the tokens. Hence, if the issuers were caught, they could claim that their coppers were really medalets referring to the fur trade. This piece is in the National Currency Collection of the Bank of Canada. 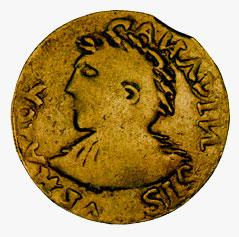