The North West Company was one of the most important companies engaged in the fur trade during the late 18th and early 19th centuries. The company began about 1775 as a loose partnership of men from Scottish, French-Canadian and U.S. backgrounds. By 1804 it was a well-organized business offering strong competition to the Hudson's Bay Company. Although the company's base of operations was Montreal, ''Nor'Westers'', such as Alexander MacKenzie, explored and traded as far as the Pacific coast.

In 1820 the company issued both brass and copper tokens, each representing the value of one beaver pelt. These tokens were about the size of our present 50-cent piece and most known examples have a small hole at the top. Instead of using them as money at the trading posts, the Native Canadians often strung them on a cord and wore them around the neck as ornaments. The token illustrated is part of the National Currency Collection, Bank of Canada. 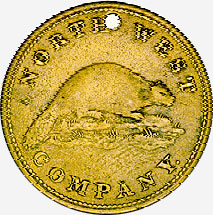