In the early days there was a perennial shortage of coins in British North America. To meet this problem Nova Scotia was granted authority in 1823 to issue penny and halfpenny tokens. These coins appeared from 1823 to 1856. The link between old Scotland and new Scotland was symbolized by the Scottish thistle which appeared on the reverse side of the earlier issues of these tokens. One needed a sturdy purse in those days as the penny pieces were nearly as large as a silver dollar. The specimen illustrated is in the National Currency Collection, Bank of Canada. 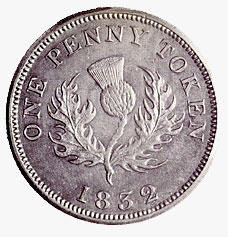