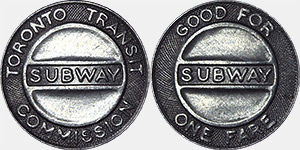 In order to allow users to pass the turnstiles, the Toronto Transit Commission's first tokens appeared in 1954, shortly after the inauguration of the Yonge line on March 30, 1954. The first order was for 10 million pieces. These small aluminum chips, sold at the time $0.15 each and were produced in Montreal by the Southam Press Co. 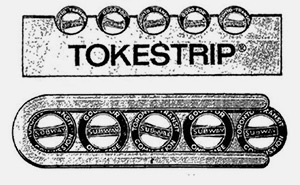 Southam Press Co. won the contract, being the lowest bidder, since the company estimated the size of the future tokens similar to the Canadian 10 cents coin instead of the 5 cents coin, which was case for other bidders.

Because the tokens were very small, some private companies as well as the Toronto Transit Commission began to produce and sell tokestrips, or tokens trays, allowing them to be grouped together.

These tokestrips allowed citizens not to lose them and not to mix them with other Canadian circulation coins. Since the cost these tokens used for public transit was increasing steadily, the Toronto Transit Commission also saw it as a way to eliminate the problems of excessive hoarding of them.

In 1966, a new brass token was produced in order to be able to travel by public transportation.

Then, 2 years later, two commemorative and limited edition tokens were designed with the emblems of The Corporation of the Borough of Etobicoke and The Borough of Scarborough to commemorate the opening of Line 2 (Bloor-Danforth) extensions. 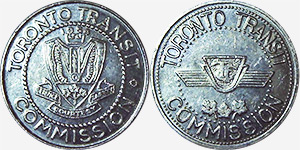 Using the same design as the 1966 tokens, new tokens were produced in aluminum in 1975. However, an estimated 5 million counterfeit tokens were in circulation in Toronto soon after. Made in the United States, the counterfeiters of these coins were arrested in November 2004: Reginald Beason, Alexander Beason, Alfredo Beason, Andrea Nicole Dawson and a US citizen. The fakes manufacturing base was discovered in the United States in 2006 by FBI agents. They can be identified by a thicker legend and whose letters are close together. 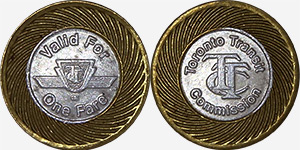 Bimetallic tokens to deal with counterfeiting

In 2006, due to smuggling causing millions of dollars in losses for the Toronto Transit Commission, 20 million new bimetallic tokens were made in the United States at a cost of $1.7 million by Osborne Coinage and introduced to replace the 30 million aluminum tokens. The cost of a token to use public transportation in 2006 was $2.50, while a fake token sold for $1 on the black market.

Despite the introduction of bimetallic tokens, which are more difficult to reproduce, an estimated 2,000 counterfeit Chinese tokens were used per day. This is among other reasons why, in 2019, tokens were completely replaced by electronic payment cards.