In the opening phases of the War of 1812, Major General Sir Isaac Brock, commander of the British forces in Upper Canada, distinguished himself in his untiring efforts in the province's defence, culminating with a decisive victory over the U.S. forces at Detroit. Brock was killed on 13 October 1812 during an attack by invading U.S. forces at Queenston Heights on the Niagara frontier. During the war, private tokens began circulating in great quantity in British North America due to a severe currency shortage caused by increased commercial activity, and to an initial distrust of the series of paper notes known as "army bills'' issued by Brock. As a consequence, individual merchants ordered large supplies of copper tokens from commercial mints in Birmingham, England. After Brock's death, a series of halfpenny tokens recognizing him as "The Hero of Upper Canada" were put into circulation by an unknown issuer. The piece shown is dated 1816 and depicts two cherubs placing a laurel wreath on a funeral urn. This token is from the National Currency Collection, Bank of Canada. 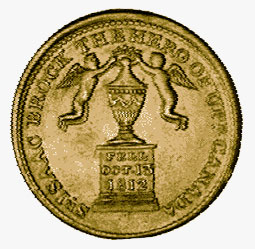