On July 28, 2020, Royal Canadian Mint launched two new circulation 2-dollar coins (including a red and black colored one) to commemorate Bill Reid contributions to contemporary Indigenous art. The bold image of a grizzly bear, a favourite character of Reid's paintings, carvings and jewelry, fills the reverse side of the commemorative coin. 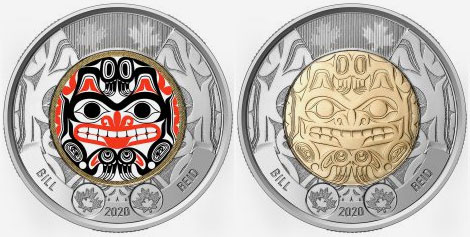 The Mint is delighted to add the story of Bill Reid's pivotal role in raising awareness of Haida art, and the traditions and culture it represents to the long list of circulation coins celebrating what makes us proud to be Canadian. Millions of Canadians will experience the power and beauty of Bill Reid's art as this coin finds its way to them in their change.

Marie Lemay, President and CEO of the Royal Canadian Mint

The artwork appearing on the 2020 $2 Circulation Coin - 100th Anniversary of the Birth of Bill Reid is known as Xhuwaji, Haida Grizzly Bear. Reid painted it in 1988 on a ceremonial drum belonging to the Sam family of Ahousat, British Columbia. He later adapted the design for reproduction on silkscreen prints, with proceeds benefitting the Artists for Kids Trust, which benefits children's art education in British Columbia through the sale of original prints created by professional artists.

On April 30, 1996 Canada Post issued The Spirit of Haida Gwaii in the Masterpieces of Canadian art series. The stamp was designed by Pierre-Yves Pelletier based on the sculpture The Spirit of Haida Gwaii (1991) by William Ronald Reid in the Canadian Embassy, Washington, United States. The 90 cents stamps are perforated 12.5 x 13 and were printed by Ashton-Potter Limited.

20 dollars banknote - Back by Bill Reid

The $20 note, issued in September 2004, features a portrait of the Queen based on a photograph taken in 2000 by Charles Green specifically for this note. The engraving was done by Jorge Peral and appears next to an illustration of the entrance to the Centre Block of the Parliament Buildings. The theme of Arts and Culture is illustrated on the back by the artwork of Bill Reid, which was inspired by the Haida culture of Canada's northwest coast. Depicted from left to right are The Raven and the First Men, Haida Grizzly Bear, The Spirit of Haida Gwaii, and Mythic Messengers. The note also features a passage from La montagne secr&egracete by Gabrielle Roy and its English translation by Harry Binsse.